We are excited to announce that this post officially kicks off a series of interviews which will be featured jointly on Two in a Tepee and KidLit TV! KidLit TV is an incredible resource for parents, carers, and educators to discover great children’s books and learn more about the people who create them through podcasts, videos and interviews. 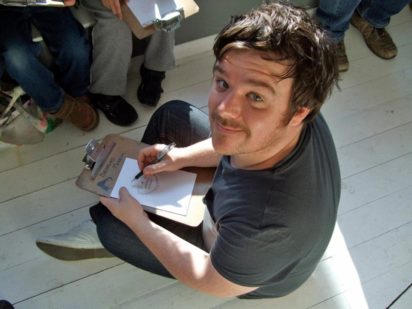 I’ll be interviewing some of Two in a Tepee’s very favourite children’s picture book authors and illustrators about the picture books and characters that have had the strongest impact on their lives — whether by getting them through a tough time, opening their eyes to a world beyond the school bus, or inspiring them to want to make picture books.

Picture books have the power to get into a child’s head and stay lodged there into adulthood — and as we will come to see through these interviews, they also have the power to shape a person’s life path. Together we are going to explore the profundity of a genre that is often assumed, by its very nature, to be simple or basic, and learn about our favourite authors along the way.

So, without further ado, I bring you David Litchfield, whose debut picture book, The Bear and the Piano won the Waterstones Children’s Book Prize for Best Illustrated Book 2016 and is nominated for the CILIP Kate Greenaway Children’s Book Award 2017 . 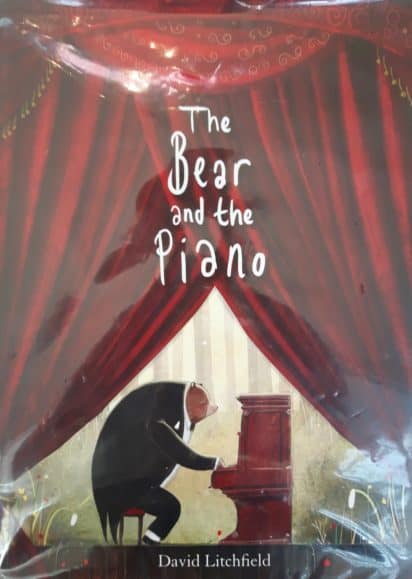 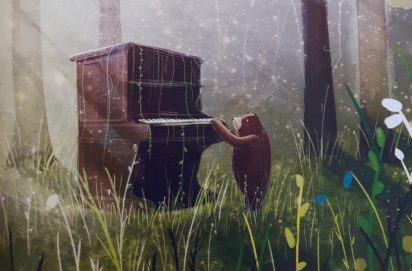 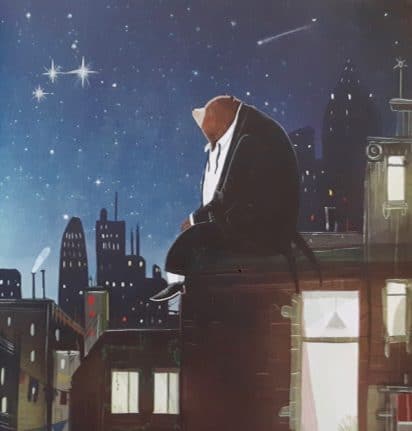 TiaT: David, was there a particular picture book that had a strong impact on you as a child?

DL: This might sound really obvious, but Where The Wild Things Are will always have a special place in my heart. I have very early memories of those great drawings and those great monsters. The whole book, from the sparsely written text, to the adventure story element, and obviously the amazing artwork, really just gives you a sense that that absolutely anything is possible if you use your imagination. As a child, I found that book very captivating. 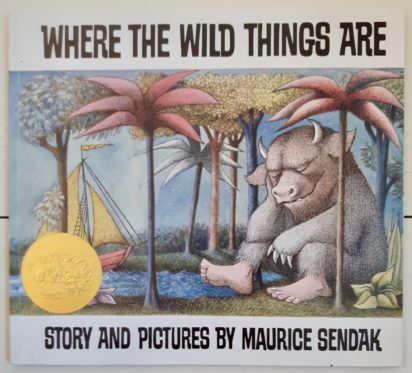 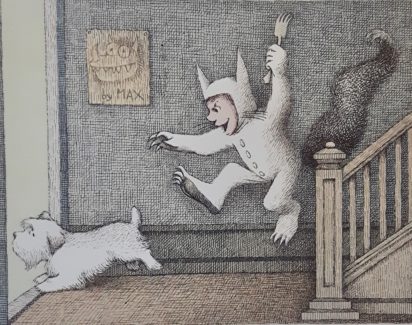 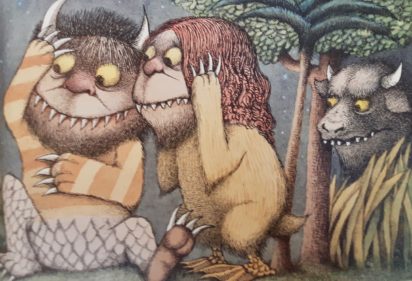 TiaT: What was it about Where the Wild Things Are that first caught your eye?

DL: It was mainly the artwork. Today it obviously still looks stunning, but when I was five, the drawings and the cross-hatched style Mr Sendak used really was from another world. The wild things themselves are actually brilliant creations as well. It’s quite hard to bring to life a character that is both scary and lovable, but Sendak does this with all monsters. When I first saw the book and the cross-hatched style of drawing Mr Sendak used, I was just hooked, and instantly tried to copy that technique.

TiaT: Are there particular images or lines you can remember that really wowed you?

DL: Obviously, “let the wild rumpus start!” is a great line — but it’s actually the three spreads straight after that, where there are no words, just glorious, full-bleed illustrations (that really got me).

There are no words, but you can really hear the howling and the music playing and the trees creaking under the weight of the monsters.

I also absolutely love it when Max’s bedroom turns into a forest over the course of a couple of pages. Again, that just showed me the power of imagination — how things don’t have to make sense and anything is possible. 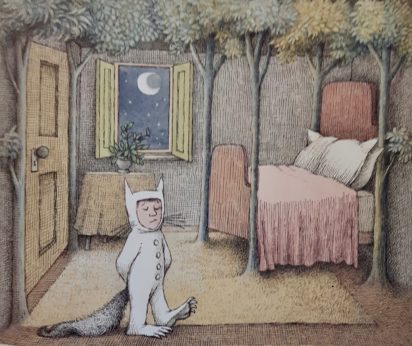 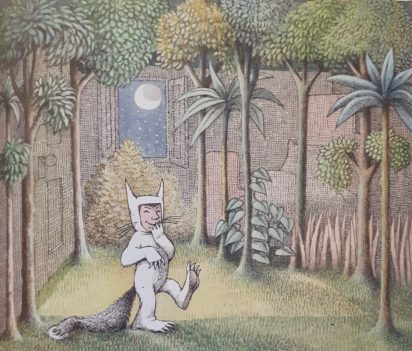 TiaT: Do you remember who introduced you to the book?

DL: I do remember the first time I saw Where The Wild Things Are. It was at school actually, and I was probably about five. It was in Year 1, Mrs Bunnage’s class, and she read it to us at storytime. I remember her holding it up and seeing the cover for the first time with the sleeping monster and those beautiful subdued colours. And like I said, it felt like it was from another world.

I think my main diet of children’s books and culture up until then had probably been Mr Men books, Postman Pat and things of that nature. Those are obviously also great, but Where The Wild Things Are felt like a peek into another window of reality.

TiaT: What did the book mean to you personally ?

DL: I definitely think it played a big part in inspiring me. My first urge after seeing it was “I want to draw that!”

TiaT: Do you think, then, that this book impacted your personal style as an author and illustrator?

DL: Possibly it has, yes. It did actually directly influence me a few years ago, as I was asked by a small theatre company to design posters and characters for a stage play called ‘The Wild Things,’ which was based on the book. It was very early in my career, and to be honest, was a bit terrifying, as the book was so well loved by everyone that it felt a little bit sacrilegious to be re-designing these incredible characters. In the end, I decided to see the project as more of a homage to the book than anything else and this made me relax a little bit.  (You can check out some of the lovely work David created for that production here: http://tinkerd.tumblr.com/tagged/wild-things )

TiaT: Is there a picture book you have seen recently that knocked your socks off that you would recommend to young readers?

DL: Yes. In fact, tonight, I just read ‘The Storm Whale In Winter’ by Benji Davies. My son and I read it together — we both had our socks blown off by it. The artwork is brilliant — as you would expect from Benji — but, oh my, the story is such a touching one. It really worked for me and my son. Maybe it’s because the story is about a boy and his dad, but it definitely worked its magic on us.

TiaT: Can you tell us what you are working on at the moment?

DL: I’m working on a few projects right now, all of which are not out for a good year or so (but they are all super exciting!!!). So, I’ll tell you a bit about one that is coming out next year. It’s called Grandad’s Secret Giant and it is the story of a Grandad who has a secret friend who happens to be a giant. The giant does good deeds for the town and no one knows about him, apart from Grandad. He’s like a guardian angel for everyone in the town. Anyway, the story is all about how Grandad manages to keep the giant’s secret for so long, especially when his little grandson, Billy, begins to get suspicious. It’s also about embracing your differences and not hiding away the inherent ‘oddness’ of what makes you, you.

It’s a story I have been thinking about for a good few years now and is actually one of the ideas I pitched to Frances Lincoln when I had my first meeting with them in 2014. At the end of that meeting, they decided to develop ‘The Bear & The Piano’ which came out last year. But, thankfully, they also liked the idea behind the giant story too. So, I’m really happy that Grandad’s Secret Giant will be my second author/illustrator book and will be published by Frances Lincoln in April 2017.

I’m really looking forward to hearing what everyone thinks when it comes out.

TiaT: We can’t wait! Thanks so much, David, for taking the time to explore the power of picture books with us.

LOVE this interview, David and Stephanie :D And it’s amazing how often WHERE THE WILD THINGS ARE comes up as a favorite. It really is a masterpiece :)

This is a great interview on both sides. I’m sorry TiaT didn’t continue. It looks like a great series. Stay well.✌??????

When I tried to catch Santa...