Book Trailer PREMIERE! OUT OF THE BLUE

KidLit TV is proud to premiere the book trailer for
OUT OF THE BLUE: How Animals Evolved from Prehistoric Seas

“A book to be read over and over for its intriguing story, illustrations, and captions.”
– School Library Journal (*starred review)

TAKE THE PLUNGE: Introduction to the Research and Writing Process for OUT OF THE BLUE

This 7.5-minute video highlights the research, writing, and illustration process for the nonfiction picture book OUT OF THE BLUE: HOW ANIMALS EVOLVED FROM PREHISTORIC SEAS (Candlewick Press, May 2021). The video supports lesson plans for students in grades 1-4, available with other educational resources at https://elizabethshreeve.com. It introduces three scientists who helped with the book — and features special video star, Hector the Dog!

TALKING TO THE SCIENTISTS: Interviews with Three Experts Behind the Book, OUT OF THE BLUE

This 17-minute video features interviews with three leading scientists who helped with the research and writing of the nonfiction picture book, OUT OF THE BLUE: HOW ANIMALS EVOLVED FROM PREHISTORIC SEAS (Candlewick Press, May 2021).
– Dr. Rich Mooi of the California Academy of Sciences explains how museum scientists use fossils, live animals, and field work to explore life in the oceans.
– Dr. Petra Sierwald of the Field Museum uncovers surprising secrets about the first animals to move from water onto dry land.
– Dr. Neil Shubin of the University of Chicago presents his field work in the Canadian Arctic and the remarkable discovery of the Tiktaalik fossil, a “fishapod” from 375 million years ago.

Recommended for grades 2 and up, this fast-moving STEM video reveals how field scientists explore new territory and offers sneak peeks into the collections of top science museums. For author visits or more information about the book, please visit https://elizabethshreeve.com 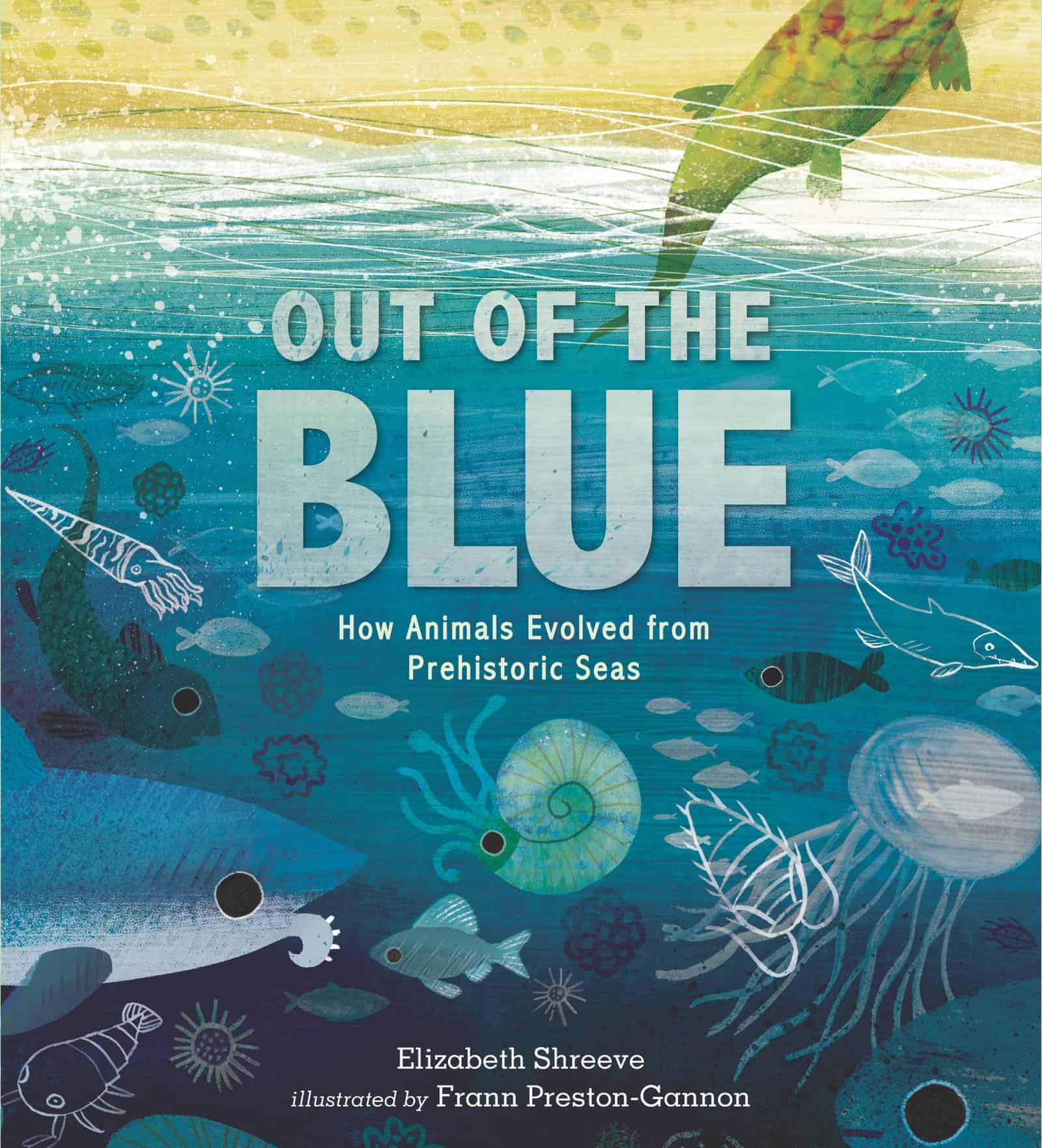 Graceful, succinct prose and engaging illustrations trace the evolution of life on Earth out of the blue and back again.

Clear and inviting nonfiction prose, vetted by scientists—together with lively illustrations and a time line—narrate how life on Earth emerged “out of the blue.” It began in the vast, empty sea when Earth was young. Single-celled microbes too small to see held the promise of all life-forms to come. Those microbes survived billions of years in restless seas until they began to change, to convert sunlight into energy, to produce oxygen until one day—Gulp!—one cell swallowed another, and the race was on. Learn how and why creatures began to emerge from the deep—from the Cambrian Explosion to crustaceans, mollusks to fishes, giant reptiles to the rise of mammals—and how they compare to the animals we know today, in a lively and accessible outing into the prehistoric past that boils a complex subject down to its lyrical essence.