“Part of the process of becoming an artist is really trying to figure out how to x out all of the voices, because the only one that matters is your own.” – JM Superville Sovak

BOOKS
Via IndieBound.org
Into the Dangerous World (Illustrated by JM Superville Sovak), When her father torches the commune and himself Ror’s life changes. She, her mother and sister end up in a homeless residence in Manhattan, where she runs into trouble and love with Trey, the leader of Noise Ink, a graffiti crew.

On the city’s streets, and in its museums and galleries, Ror finds herself pulled in different directions. Her father wanted her to make classic art. Noise Ink insists she stay within their lines. Her art teacher urges her to go to college. What does “she” want?

Ror’s journey is a seamless blend of words and pictures, cinematic in its scope–a sharp-edged, indelible work of art that will live inside your head.

Deadly (Illustrated by JM Superville Sovak), If Prudence Galewski is ever going to get out of Mrs. Browning’s esteemed School for Girls, she must demonstrate her refinement and charm by securing a job appropriate for a young lady. But Prudence isn’t like the other girls. She is fascinated by how the human body works and why it fails.

With a stroke of luck, she lands a position in a laboratory, where she is swept into an investigation of the fever bound to change medical history. Prudence quickly learns that an inquiry of this proportion is not confined to the lab. From ritzy mansions to shady bars and rundown tenements, she explores every potential cause of the disease. But there’s no answer in sight—until the volatile Mary Mallon emerges. Dubbed “Typhoid Mary” by the press, Mary is an Irish immigrant who has worked as a cook in every home the fever has ravaged. Strangely, though, she hasn’t been sick a day in her life. Is the accusation against her an act of discrimination? Or is she the first clue in a new scientific discovery?

Prudence is determined to find out. In a time when science is for men, she’ll have to prove to the city, and to herself, that she can help solve one of the greatest medical mysteries of the twentieth century.

Via Amazon.com
Redemption, Twelve-year-old Lily has not seen her father for more than eight months. He was taken from her and her mother one night by the baron’s men, forced against his will to leave England and to be part of a colony in the New World. And now Lily and her mother are in danger — for the baron’s men say they no longer have any right to their land. They also face persecution for being followers of Frere Lanther, a man who has been excommunicated by the church for wanting to purge it of its corrupt practices. Their one chance for safety and freedom is to take passage on the next ship out to the New World. The harrowing voyage reveals painful secrets that strip Lily of her innocence. But Lily also makes a friend — a boy named Ethan, son to none other than the baron himself, who is also onboard. Together Ethan and Lily navigate their way through betrayals and treachery in a strange new land. Separated from the group, lost in the wilderness, and captured by an Indian tribe, Lily must reach deep inside herself and tap into strength she never knew she had if she is to survive.

ABOUT JULIE
Via JulieChibbaro.com
Julie Chibbaro is the award-winning author of three novels: Into the Dangerous World, Deadly, and Redemption. Into the Dangerous World is a Junior Library Guild Selection. Deadly won the 2011 National Jewish Book Award, and was Top 10 on the American Library Association’s Amelia Bloomer Project list. It was named a Bank Street Best Book, and an Outstanding Science Trade Book by the National Science Teachers Association. It is now part of many schools’ curriculum. Julie Chibbaro’s first book, Redemption (Simon & Schuster 2004), an epic tale of love, kidnapping, and white Indians, won the 2005 American Book Award.

Julie has appeared on author panels throughout the country, and was a Featured Speaker at the USA Science & Engineering Festival Book Fair. Julie teaches at the Gotham Writers Workshop, in Manhattan, and at Botsford Arts, in Beacon, NY. She has written for The Prague Post, The Montreal Gazette, The Poughkeepsie Journal, Hudson Valley Magazine, NY States of Mind, Books in Canada, SundanceTV, Tuttle Publishing, and many other venues. She studied writing at The New School, and with Gordon Lish. She received scholarships to study with Clark Blaise at the Prague Writers Workshop, and with Janet Fitch and Amy Tan at the Squaw Valley Community of Writers. At the New York Writers Institute, she took a Master class with Marilynne Robinson and Ann Beattie. She is represented by the agent Jill Grinberg.

ABOUT JEAN-MARC (JM)
Via SupervilleSovak.com
Jean-Marc is an artist who makes videos of his doppelgangers, collects antique bricks, draws portraits of lynch mobs, and gives guided tours of NYC housing projects. His work has been exhibited at the Aldrich Contemporary Art Museum, Socrates Sculpture Park, Manifesta 8 European Biennial of Contemporary Art, Murcia, Spain and the International Studio and Curatorial Program (ISCP) in New York City. His videos are distributed by Videographe, Inc., and have been screened worldwide. Jean-Marc is the recipient of an Emerging Artist Fellowship at Socrates Sculpture Park, a NYFA SOS Grant, and a Canada Council Travel Grant. He was selected as a Smack Mellon Hot Pick and has been a guest speaker at Shadow Festival 8 in Amsterdam, the New York Public Library, and Bard College. He is the illustrator of Deadly by Julie Chibbaro and Into The Dangerous World. He lives and works with Julie in Beacon, NY. 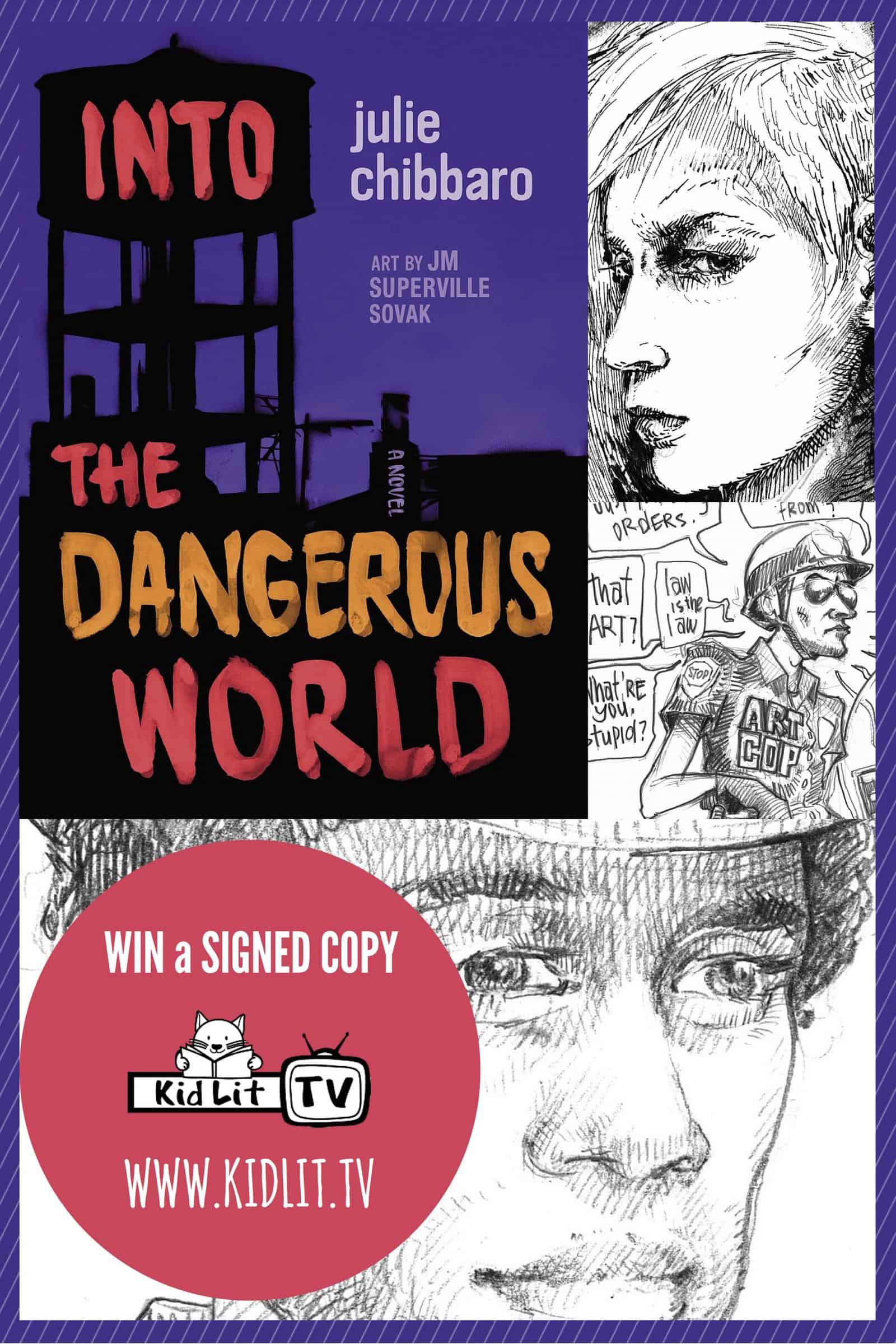 The art in this book looks amazing. I can’t wait to read it.

I have found that street art can be beautiful and impactful, and I’m interested to peruse the melding of text and illustrations of INTO THE DANGEROUS WORLD. While I dig JM’s work, particularly the bricks, my current favorite artist is Handiedan, the Dutch creator of mixed media collage art.

Wow, this book looks great! I am very excited to read it. There are so many amazing artists. Guerrilla Girls, Keith Haring, and Barbara Kruger are some of my favorite.

How to Draw An English Rose Real Easy