Tara Lazar is known and loved by many and is one of our KidLit TV StoryMakers. She’s jam-packed with fun, stories from her real life that are just as creative and exciting as her fictional books! Tara has two books about to hit the shelves in rapid succession: one in August of this year, and then a second book in October. In this article, you’ll learn about these upcoming children’s books as well as learn more about how Tara worked with her illustrator and more!

Tara’s book Little Red Gliding Hood (Random House Children’s, Oct 2015) is a book all parents will enjoy reading to their kids over and over again, something only few picture book authors can overcome. Little Red Gliding Hood was given an amazing review by Kirkus Reviews! You can read the review, and be sure to congratulate Tara!

During Tara’s StoryMakers episode, we learned more about her and her career!

Tara’s newest book I Thought This Was a Bear Book (Aladdin/S&S, Aug 2015) is one laugh-out-loud adventure. It’s about an alien who makes a crash landing after a bookcase collapses and he falls out of his book. Crashing into the beloved classic “The Three Bears,” Alien jumps into a strange world with talking bears and many other strange beings from the classic story. 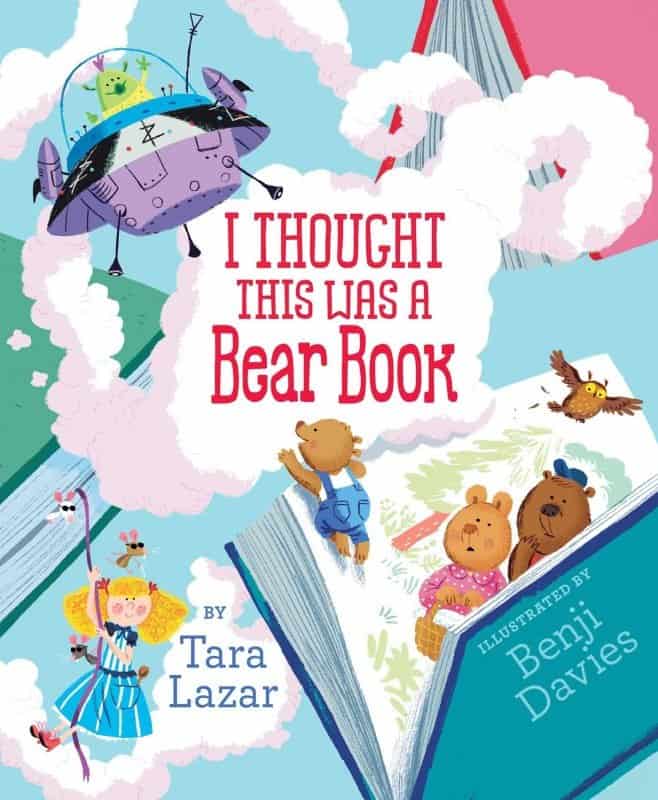 Dear old, Mama Bear and Papa Bear try all kinds of ways to get Alien back to his book, with some help from their troublesome nemesis, Goldilocks, but don’t have much luck. But they all forgot that it might be Baby Bear who’ll have the perfect solution to get Alien out of the woods and back to his planet. But will anyone listen to the littlest voice in the story?

I Thought This Was a Bear Book will be in bookstores everywhere on August 4th. To celebrate, the KidLit TV team interviewed Tara and got the “inside scoop” about her book.

How did you come up with such a unique twist to I Thought This Was a Bear Book?

Hmm, which twist are you talking about? LOL! It’s a lot of fun to play with stories. I always suggest that writers think “out of the box”, so in this case, I thought “out of the book.”

How did you and Benji Davis collaborate on the illustrations? 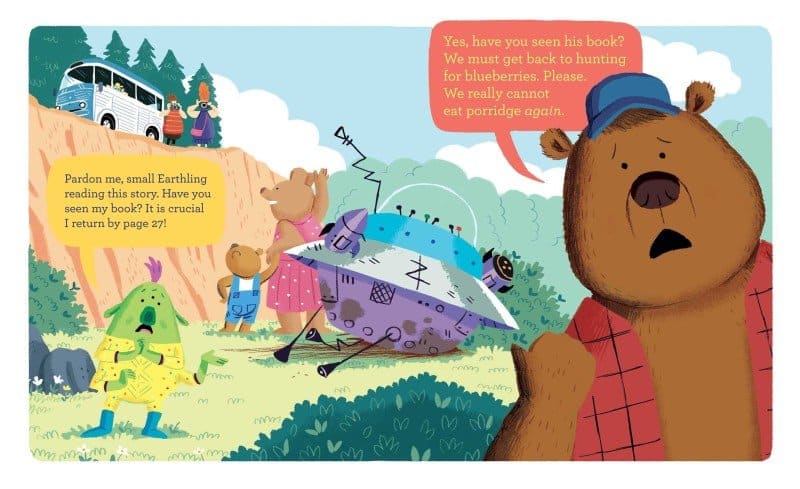 Typically there isn’t a lot of collaboration with a picture book. You have to trust that your words will be interpreted and taken to a whole new level.

But we did collaborate a bit with this book. I revised the resolution as Benji was in the middle of his sketches (for which he’ll probably never forgive me)! My editor and I agreed on what to do in the book, but Benji had to figure out a way to draw it in one spread. I stepped back and told him to do whatever he saw fit and I’d rewrite afterwards if the new illustration needed it. It didn’t!

Of course, this is all very cryptic because I don’t want to give anything away!

I love the idea behind mashing-up the classic storybooks. How did you come up with it?

I was working on a story that was NOT going well. I was stuck concentrating on it for so long that it lost all its mojo. I had no groove.

So I decided to switch gears, start something new. I reached over to a pile of papers on my side table and read a post-it note: “Character who doesn’t belong in book.” It was an idea I had jotted down quickly late one night. 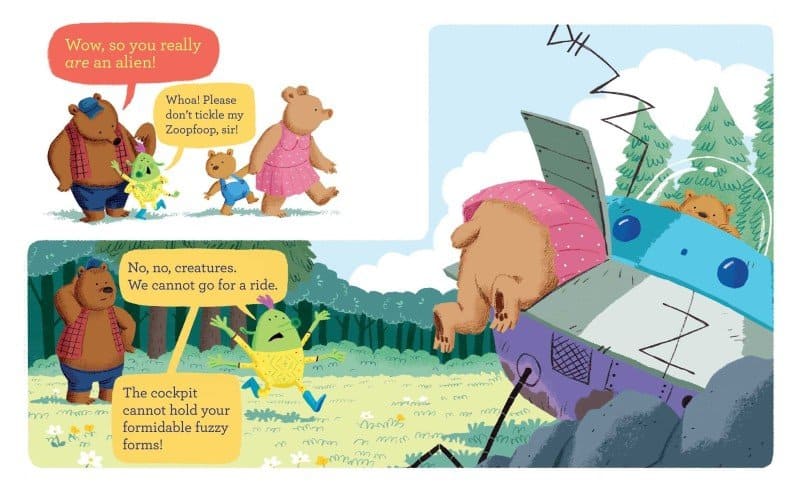 I decided to put two unlikely characters together. I thought of an alien–because who doesn’t like aliens?—who was small, green and slimy. Then I tried to think of that alien’s opposite and I came up with a furry, cuddly bear. I had to figure out a way to get the alien into the wrong book, so I created a bookshelf mishap. The first draft wasn’t about “The Three Bears” but it eventually morphed when I brought Goldilocks in. It’s all her fault, as usual.

How will kids relate to this book?

The book is both familiar and fresh. Kids will know all about Goldilocks and The Three Bears, but then they’ll get the added mayhem of an alien crash-landing to mix it up. Plus, they get to see how Baby Bear solves the story. Kids love when adults bungle things up and the kid becomes the hero.

Kids will also wonder if there are any shenanigans going on in their own bookshelves…?

What is at the heart of this story?

This is really a book about the love of books.

I think this book would make a great reenactment for school plays. What advice would you give kids if they did do this? 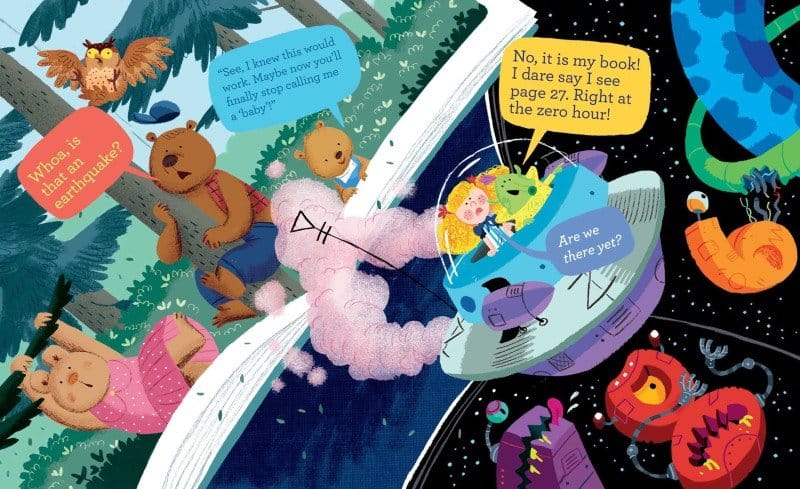 This story includes many classic tales; will it appeal to both young and old readers?

I always keep adults in mind while writing my stories, as they’re the ones who have to read books to children over and over again. (Again? PUHLEEZE?) So I stuff little jokes in there that adults may laugh at more than the kids. And in the illustrations, Benji paid homage to my favorite comic strip, The Far Side. Kids won’t catch the visual reference, but adults of my generation will.

Which character are you most like and why? Which would you invite to tea / a picnic? Or which character would definitely be your bestie?

I’m most like Goldilocks because I am constantly interrupting people…and I like to get a lot of shut-eye. I’d invite all three bears to a picnic because they have baskets full of blueberries! My BFF would be Baby Bear because he’s so clever.

Be sure to visit Tara’s awesome website to discover books, news, activities and so much more. And find Tara on Social Media! 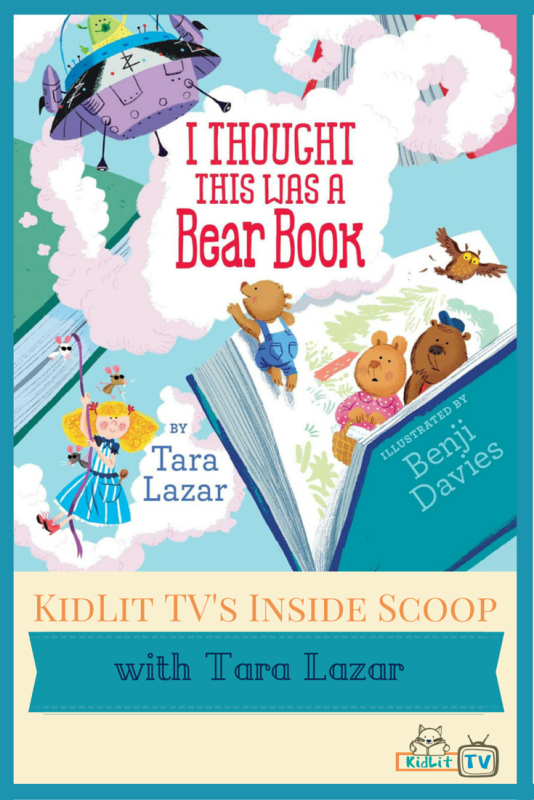 Tara, your energy and humor is so awesome…anytime, anywhere! <3 Can't wait for this book!

Thanks, Carrie. I had a Matcha green tea before I filmed this. Hence the energy. I had only slept two hours the night before!