Want to do a writing exercise with your kids, but are short on time? Want to teach your child how to create a character?

If so, then you’ll like the writing activity that our featured team member, Kristin Ammerman, came up with. Kristin is a working mom who has been writing in her “spare time” for years. Kristin relates well to Tara Lazar whose blog tag line is “Writing for Kids While Raising Them.”

In this article, Kristin shares how all parents and caregivers can invent fictional characters with kids using the “Shared World” technique. Unlike Fan Fiction which uses characters and the world, “Shared World” or “Shared Universe” uses only the world. Kristin recommends doing this to get kids into a creative writing mode.

Writing an entire story can be overwhelming for kids. Writing up a character bio will still take time, but is much simpler and can be accomplished faster.

Question from KLTV: How did you come up with this idea?

This was something that evolved over a summer vacation this year. I did this with my nieces and my own kids while we were spending time together eating ice cream Creamies and Red Vines licorice in the backyard. The kids were enthusiastic about trying it out and I loved that they were getting writing lessons in the process. This doesn’t focus on developing plot or tension, but it’s a great lesson on creating characters. Good characters drive stories, right? So I was happy to encourage their enthusiasm. It turned out so well, that I knew I wanted to share it with our friends on KidLit TV!

Fantasy is easiest, but stories from any genre with a rich world will work. Fantasy stories you might consider:

Many kids prefer creating within defined world rules and boundaries: Harry Potter has “houses” within Hogwarts as well as defined groups (goblins, wizards, house elves, etc.). Percy Jackson has “camps” based on the lineage of the Gods. Spiderwick has an entire field guide dedicated to pointing out the different classes of creatures. Using an existing story is a great way to jump start the character writing activity.

If you are an author, like Kristin, you have a rich world that is never shared with the readers.

In this example, I created a character from my original story.  About 90% of an author’s world is never revealed to readers. There is plenty of room to create mini stories within that world that never appear in the story you’re writing for publication. It’s fun to include other characters in the back story that your kids had a hand in creating!

If your children want to write their own story, try “world building” and then make up characters to exist in their imagined world.

Step 2: Decide on a “Class” of Creature

If you are using an existing story, ask your child what kind of creature they want to create. A house elf from Harry Potter? A pixie from Spiderwick? Narrow down the type of creature, wizard, or person your character is going to be.

In my story, there are five classes of creatures based on Earth elements. My nieces were excited to explore all the creatures I’d created within each element, and they were able to select the ones that were most interesting for them.

Make sure you have a physical description of your character as well as a personality description. If your child doesn’t often see books that reflect them, this is a good opportunity for them to create a character they can relate to. Mix their own culture with that of the culture in the world. The character won’t look exactly like them (especially if they are a dragon or other mythical creature), but it will have some similar characteristics. Another exercise would be to have your child stretch their imagination and make this character very different from themselves. Have them think about a character from a different perspective.

Physical descriptions can include:

Personality descriptions can include:

The kids wanted to write descriptions based on a mash-up of themselves and the typical characteristics of the character they selected.

What is special about this character? Are they a healer? Can they run really fast? Can they use a weapon? If they have magic, what can it do?

This is a creative exercise, but it can also be challenging for kids trying to keep inside the world rule boundaries.

This is the most imaginative, fun part of the exercise!

Bonus!  You can also identify a weakness. In most stories, all characters have their “Achilles heel.” Think of it like playing “rock, paper, scissors.” Each element can be defeated by another. It keeps the balance. If you have an “all powerful” creature, then they are never in any danger of being defeated. What’s the fun in that?

These mini stories can be as long or as short as you want to make them. They can be several pages long or just a paragraph. This is where your child can think in terms of story. Using their powers, in this particular world, what’s something they could do? What adventure could they have? This is the main part of the bio that puts into action all the previous elements you’ve constructed for this character.

I wrote the bios for some of the characters as a fun surprise for my nieces. However, my own kids wanted to write their own. Flexibility in the project makes this extra great.

Names can evolve as you write your story. If you decide your character is a tough warrior, having hard sounds like “k” or “r” reinforce that. Or if she’s a fair maiden, vowels like “ah” or “ae” are perfect. Or your name can be a mirror of their special skill like “Sally Green Thumb.” Authors like J.K. Rowling are brilliant with coming up with names that sum up the character in one or two words!

This is totally optional, but lots of fun. Especially if your kids like to draw or you have an illustrator in the family.

I can barely draw a stick figure. So my friend, Paul Tallman, drew these up for me!

These bios are surprise gifts for Kristin’s nieces, based on conversations she had with them. Shhh! Don’t tell!

We hope you try out this writing exercise for kids! If you have more tips to share about fan fiction or shared universe, please share them in the comments below. We look forward to hearing from you! 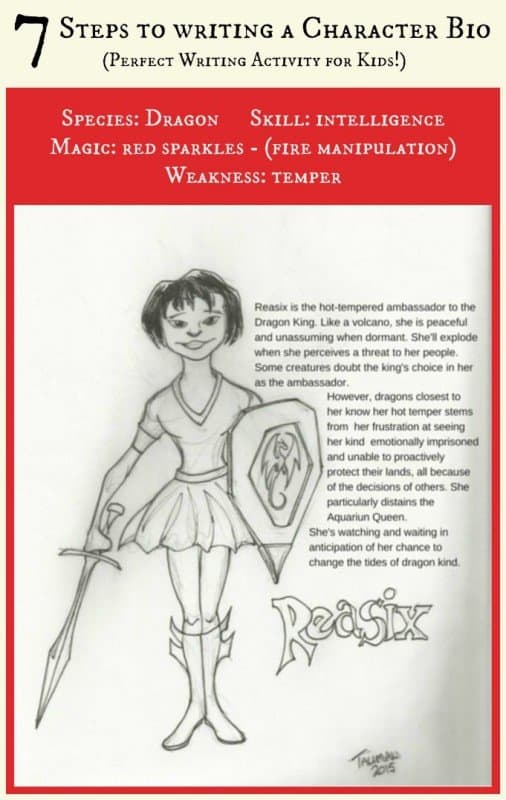 At KidLit TV, I’m so lucky to work with such a creative dream team! Kristin is a talented powerhouse charged with positive creative energy and ideas. This is a great exercise for budding writers and I’m super excited to hear more about her new middle grade novel and celebrate her future successes in the publishing world.

My chin is a little higher and my step a little lighter after reading your complimentary note. You just made my day. Thank you, Julie!

Thanks, Paul! The art *is* great! I have such nice friends ;)

Kristen, I love the way you chunk out the process for kids to make it fun and manageable for them!

Thank you, Cat! Anyone who knows you or has seen your website (especially your kids’ corner) knows you have your finger on the pulse of what kids like. Glad you give the thumbs up on this activity for kids!

Love this! Anything to spark this kind of creativity in kids (young AND old) is a wonderful thing :D

Thank you, Donna! Makes me so happy to have you comment and read your positive feedback :)

It’s my pleasure, and it’s so flattering that you knew my first name! lol :) Great stuff, Kristin :) 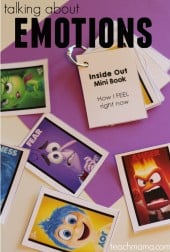 ‘Inside Out’ Mini-Book and Card Game