All good things must come to an end … sort of. In early August 2016, the award-winning and bestselling author/illustrator Aaron Becker brought his Journey trilogy to a close with Return. While the series is ending we’ll have these brilliant, multi-layered, and breathtaking wordless picture books to explore and interpret, forever!

StoryMakers host Rocco Staino and Aaron had an illuminating discussion about his inspiration for the trilogy — about a girl’s adventures in the far off city of Pallonezia — including children’s literature classics, The Wizard of Oz and Where the Wild Things Are. Although there is a story arc that pulls them together; Journey, Quest, and Return work beautifully as stand-alone books. The Journey trilogy is satisfying for parents and children because of its many layers and possibilities. Also, it begs the question, “What are we missing when we don’t explore the world around us?”

Join us on a quest to:

Aaron believes everyone should be a storyteller. What stories do you want to tell?

We’re giving away Aaron Becker’s Journey trilogy. You can win Journey, Quest, and Return! The giveaway ends at 11:59 PM on August 31, 2016. ENTER NOW! 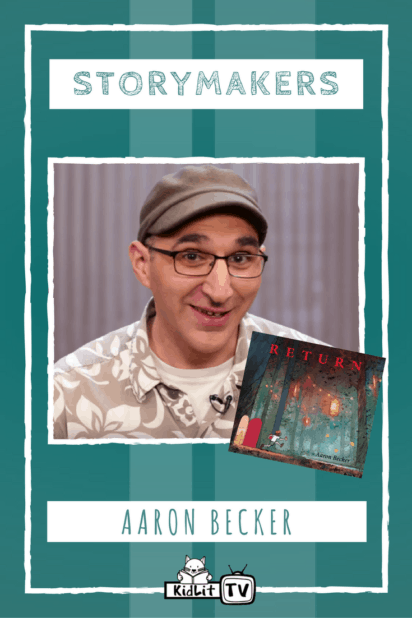 Failing to get the attention of her busy father, a lonely girl turns back to a fantastic world for friendship and adventure. It’s her third journey into the enticing realm of kings, emperors, castles, canals, exotic creatures and enchanting landscapes. This time, it will take something truly powerful to persuade her to return home.

A king emerges from a hidden door in a city park, startling two children sheltering from the rain. He  gives the children a map and some strange objects, than he is captured by hostile forces that whisk him back through the enchanted door. Just like that, the children are caught up in a quest to rescue the king and his kingdom from darkness, while illuminating the farthest reaches of their imagination. Colored markers in hand, they make their own way through the portal, under the sea, through a tropical paradise, over a perilous bridge, and high in the air with the help of a winged friend.

A lonely girl draws a magic door on her bedroom wall and through it escapes into a world where wonder, adventure, and danger abound. Red marker in hand, she creates a boat, a balloon, and a flying carpet that carry her on a spectacular journey toward an uncertain destiny. When she is captured by a sinister emperor, only an act of tremendous courage and kindness can set her free. Can it also lead her home and to her heart’s desire?

Like many American boys born in the wake of the Apollo missions, Aaron Becker decided early on he would be an astronaut. His mother was an astronomy teacher at a local college in his hometown Baltimore. She would take him along on her nighttime fieldtrips to the observatory; its musky smell relieved with the opening of its domed roof. At some point, he surmised that a career in actual space travel required military training, and this seemed like a lot of work. So he switched gears and started drawing pictures of outer space instead. There was palpable joy in this: creating civilizations and stories filled with a cast of characters of my own design. To be sure, these worlds were reflections of places inside of him. But more importantly, drawing was an immediate path for creating something he could manage on his own terms. These worlds were his and his alone. With a pad of paper and a set of markers, he could pretty much do whatever he wanted. For an eight year old confined by the limitations of his material existence, this seemed like a pretty good deal.

What a wonderful story Aaron Becker told of his life, on what and who influenced him.
Aaron is right a story can be told with just pictures.
His books are beautiful and the stories they tell are so sweet.
Rocco as always is the great interviewer.
Thanks for a great Storymaker
patte

Thanks for the feedback Patte. This was one of my favorite episodes. The books are so rich in art and perfect for warding off ennui in children and adults. It’s such a wonderful world to explore!

Hi, Aaron! Thanks for sharing some of your hidden treasures in the Journey trilogy. I love exploring far away lands.

I loved that these books appeal is for ages. A couple in their twenties discovered it and just fell in love with the story and style.

Just found your site, love it. I’m looking forward to this series.

Love sharing these books with my students.

I love worldless picture books – adventures for all ages!

They are this year’s Christmas list! Great interview.
Thank you!

Our family has a ton of favorite adventures. I love sharing stories I read as a child with my 7 year old. She’s already discovered ‘The Secret Garden’ and devours all stories with equal intensity.

Our favorite adventure has been camping with our kids. The first night we were out, there was a tornado warning. It was quite the adventure, and thankfully, we only got some major thunderstorms!

I really like Aaron picture books. My students would love to read them!