StoryMakers in the Kitchen with Emily Jenkins and Paul O. Zelinsky

Join acclaimed author Emily Jenkins (A Greyhound, a Groundhog) and Caldecott Award-winning artist Paul O. Zelinsky (Rapunzel) as they share their own recipes and chat with Rocco about their book ALL-OF-A-KIND FAMILY HANUKKAH, a Sydney Taylor Book Award honoree!

The Jewish holiday of Hanukkah is about to begin, and Rocco is in the kitchen with a couple of our favorite StoryMakers to fry up some traditional potato pancakes, called Latkes.

Before we get to that, you might be wondering what Hanukkah is all about. It is a festival of light which celebrates one of the greatest miracles in Jewish history.

The holiday reminds Jews of a time, long ago, when the Jews won a battle against the Greeks to practice their religion freely. The Greeks had banned all Jewish rituals. King Antiochus tried to make Jewish people bow down in front of a statue of him that had been put in the Jewish temple, and pray to Greek Gods, but they refused.

A small group of Jews called the Maccabees fought against this and, after a three-year war, they won. During the fighting, their Jewish temple had been destroyed. They cleaned and repaired the temple. Then, to celebrate the victory, an oil lamp was lit in it.

There was only enough oil to burn the candle for one day, but miraculously it burned for eight days. This is why the Hanukkah festival lasts for eight days and why light is really important to the celebration.

Oil is important too, and that’s why eating foods fried in oil are an essential part of Hanukkah traditions. Find out how you can make latkes in this episode of StoryMakers in the Kitchen!

Emily and Paul’s Recipes for LATKES!

Latke Recipes from ALL OF A KIND FAMILY

You can find the Potato Latke Plaid fabric, and more designs inspired by illustrations from Paul’s children books, at Spoonflower! 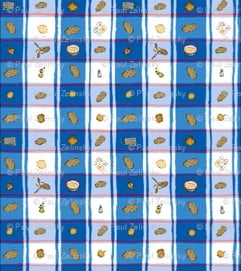 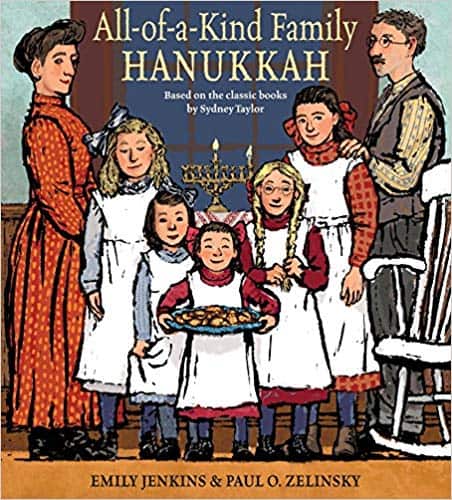 Acclaimed author Emily Jenkins (A Greyhound, a Groundhog) and Caldecott Award-winning artist Paul O. Zelinsky (Rapunzel) bring the beloved ALL-OF-A-KIND FAMILY to life in a new format. Fans, along with those just meeting the five girls (“all of a kind,” as their parents say), will join them back in 1912, on the Lower East Side of NYC, and watch as preparations for Hanukkah are made. When Gertie, the youngest, is not allowed to help prepare latkes, she throws a tantrum. Banished to the girls’ bedroom, she can still hear the sounds and smell the smells of a family getting ready to celebrate. But then Papa comes home and she is allowed out–and given the best job of all: lighting the first candle on the menorah.

First published in 1951, Taylor’s chapter books have become time-honored favorites, selling over a million copies and touching generations of readers. In this time when immigrants often do not feel accepted, the All-of-a-Kind Family gives a heartwarming glimpse of a Jewish immigrant family and their customs that is as relevant–and necessary–today as when it was first written. Jenkins and Zelinsky’s charming compliment to Taylor’s series perfectly captures the warmth and family values that made the original titles classics.

I grew up in the Boston area in the 1970s. My mother was a pre-school teacher and my father a playwright. I remember visiting my mother’s classroom and reading to the children there; even more vividly, I remember sitting in the back row of theater after theater, watching rehearsals – seeing stories come to life.
My mother read me countless picture books, but at my father’s house there wasn’t much of that nature. He read me what was at hand: Alice’s Adventures in Wonderland, Huckleberry Finn, Sherlock Holmes. He also made up stories for me and recounted the plots of Shakespeare plays.
I was a raw child. In fact, I am a raw adult. This is a hard quality to live with sometimes, but it is a useful quality if you want to be a writer. It is easy to hurt my feelings, and I am unable to watch the news or read about painful subjects without weeping. I was often called over-sensitive when I was young, but I’ve learned to appreciate this quality in myself, and to use it in my writing.

Paul O. Zelinsky grew up in Wilmette, Illinois, the son of a mathematics professor father and a medical illustrator mother. He drew compulsively from an early age, but did not know until college that this would be his career. As a Sophomore in Yale College, he enrolled in a course on the history and practice of the picture book, co-taught by an English professor and Maurice Sendak. This experience inspired Paul to point himself in the direction of children’s books. His first book appeared in 1978, since which time he has become recognized as one of the most inventive and critically successful artists in the field. He now lives with his wife in Brooklyn, New York. They have two grown daughters.

What a lovely segment in the KidLit Kitchen! It brought back many nice memories. The All of A Kind Family books were popular back in the 70’s when I taught in an Elementary School Library in Williamsburg, Brooklyn. I still share them with youngsters. I also loved seeing the team put together the ‘latkes.’ My mom’s recipe that I still use was created with the same ingredients only we didn’t use a blender…we actually used a grating board. I can’t wait to make some next week for my husband and myself to enjoy. By the way I also purchased the book and love the story and pictures. Great job!
Thanks for sharing and Happy Hanukkah!
In appreciation,

Thank you for this lovely response! Emily and Paul have done a beautiful job with this story. I’m also inspired to make the recipe and was thinking I’d try this with a grater, too!

I think people should check this video out because it teaches you to make a Hanuka food. I whached story makers in the kichen.

StoryMakers in the Kitchen with Jane Breskin Zalben