Boxes of books were stacked up on tables as the staff at the Princeton Children’s Book Festival bustled to unpack, display and wrap up all the last details before the authors and illustrators arrived. This year was the 10th Anniversary of the Princeton Children’s Book Festival at the Princeton Library and KidLit TV was invited to join in on the celebration. The event began with an overcast sky, but when guest authors like Jarrett J. Krosoczka, Ame Dyckman and Adam Lehraupt arrived the sun began to shine.


KidLit TV’s team set up their table, like many others, with goodies and swag. Our goal for the event was to interview authors and illustrators and to meet and greet folks who love kid lit as much as we do! Dare we say we were able to interview some of THE most talented, most renowned authors in the kid lit world?! Yes! We wish we had more time to interview them all!

Many authors gave presentations that day and read from their books, such as John Parra (Marvelous Cornelius) and Ame Dyckman (Wolfie the Bunny), but the most fun was when we interviewed these authors and got the inside scoop about their books and even their favorite songs.

Many of these creators were familiar faces, while others were stars on the rise. We followed them and discovered a land of new books!

During the roving reports, KidLit TV interviewed author Samantha Berger about her book Snoozefest and got her to don the KidLit TV sleeping cap. We learned about which of her characters she would like to be and even got to meet Snuggleford Cuddlebun! 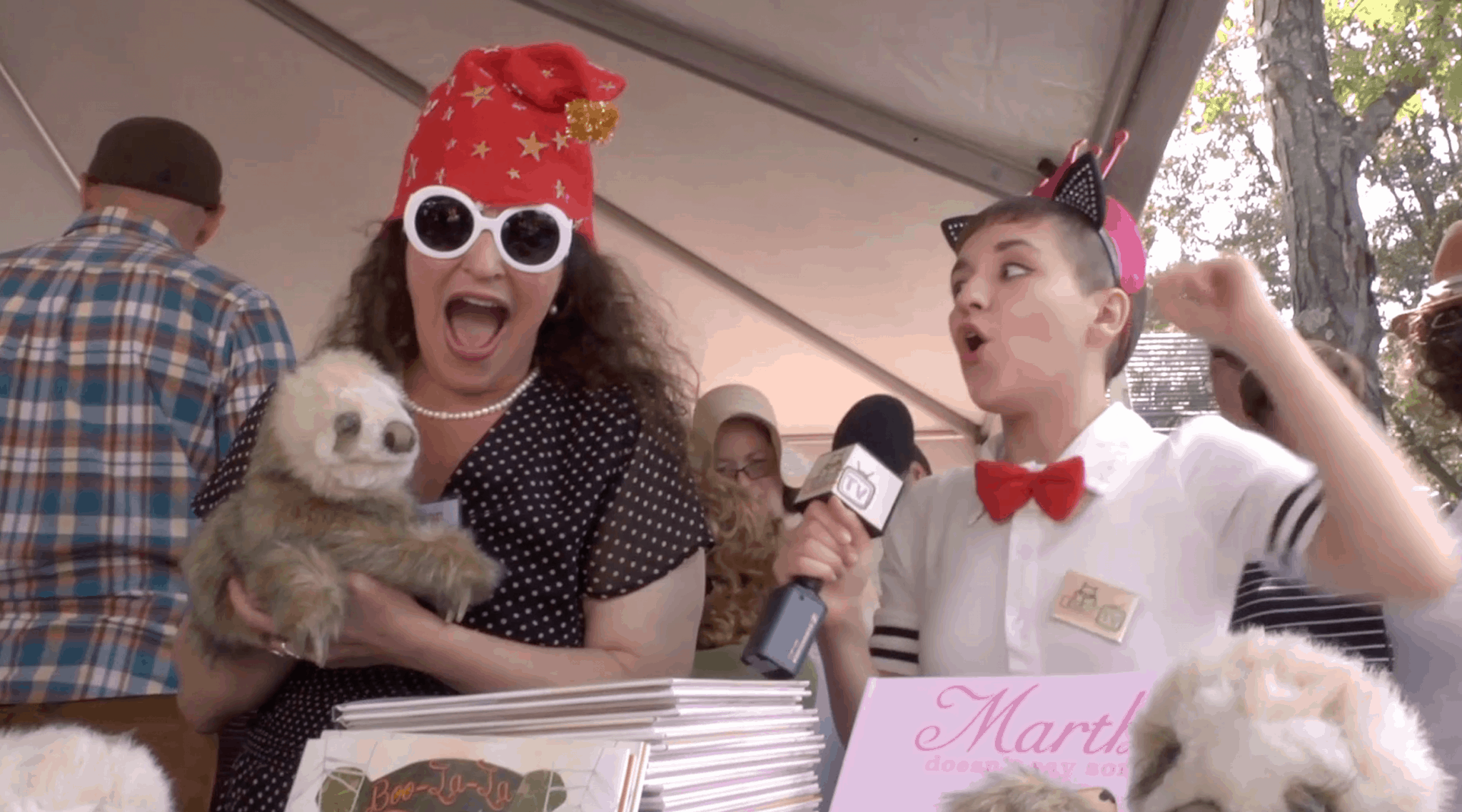 We interviewed David Biedrzycki who rocked the Princeton Book Festival with his singing when asked which song he would sing about his book Breaking News Bear Alert. David has been a commercial artist since 1980. His work has appeared in magazines, newspapers, books, billboards, and, most surprising of all, ice cream boxes. David considers the supermarket “a gallery of his work”. 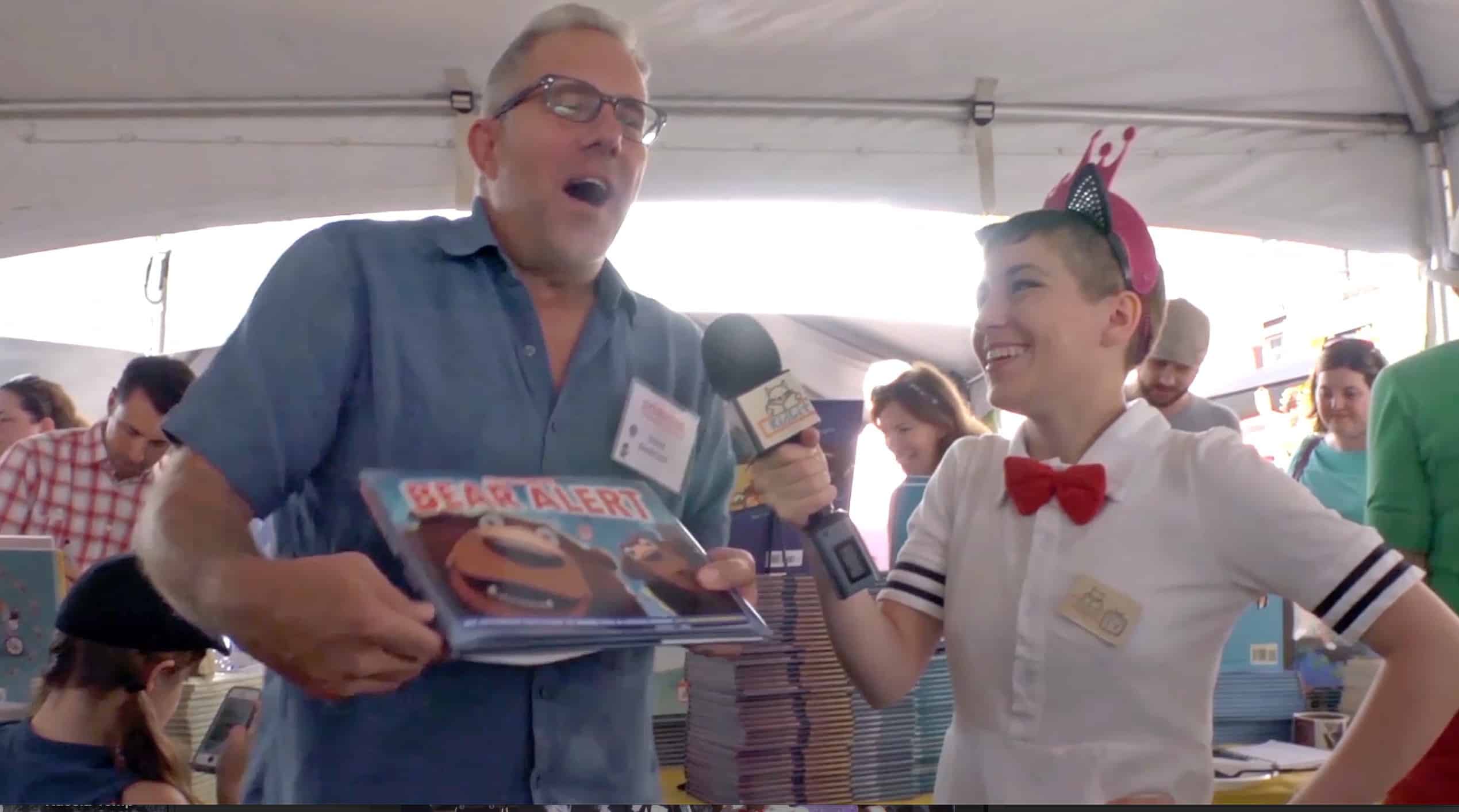 Each year David travels the world to more than 70 schools to share his digital work with aspiring young writers, illustrators, and readers. He has illustrated more than 24 books, including Dory Story, Who Will Guide My Sleigh Tonight?, the award-winning Ace Lacewing, Bug Detective series, Me and My Dragon series, and his newest Breaking News Bear Alert. He told us the story about his crazy bears in Breaking News Bear Alert, filled us in on the bear references throughout the book, and revealed the mastermind kitty cat behind the entire plot.

Speaking of kitty cats, we even interviewed the wonderful Nick Bruel author of The New York Times bestselling Bad Kitty series, a series that Julie and Katya (the biggest cat lovers on the KidLit TV team) are huge fans of. Bad Kitty is celebrating her 10th anniversary, just like the Princeton Children’s Book Festival. This year not only did we get the inside scoop about Bad Kitty, but we learned more about Puppy’s Big Day which tells the tale of Bad Kitty’s nemesis: Puppy! Even the cover of the new book shows that Kitty isn’t happy about Puppy’s spotlight. We gave Nick a squeaky toy for his old pup back home (don’t tell Bad Kitty, but we love puppies, too)! 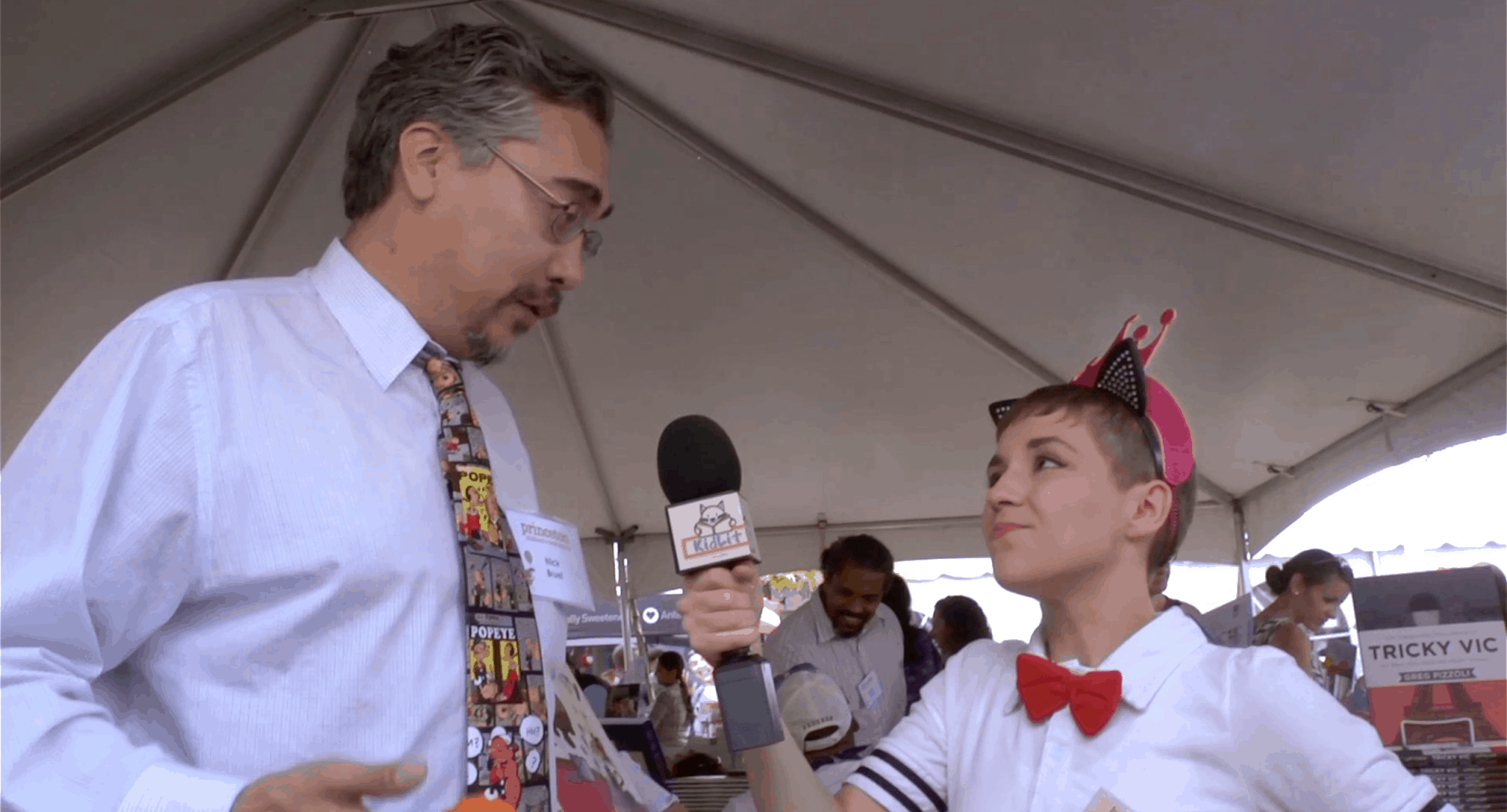 As we made our way around the tables we spotted Mike Curato and Little Elliot looking as adorable and charming as everyone knows they truly are. He told us that Little Elliot, Big City was inspired by a true story in his life. Mike is a Brooklyn-based illustrator/author who loves drawing and eating baked goods more than anything. 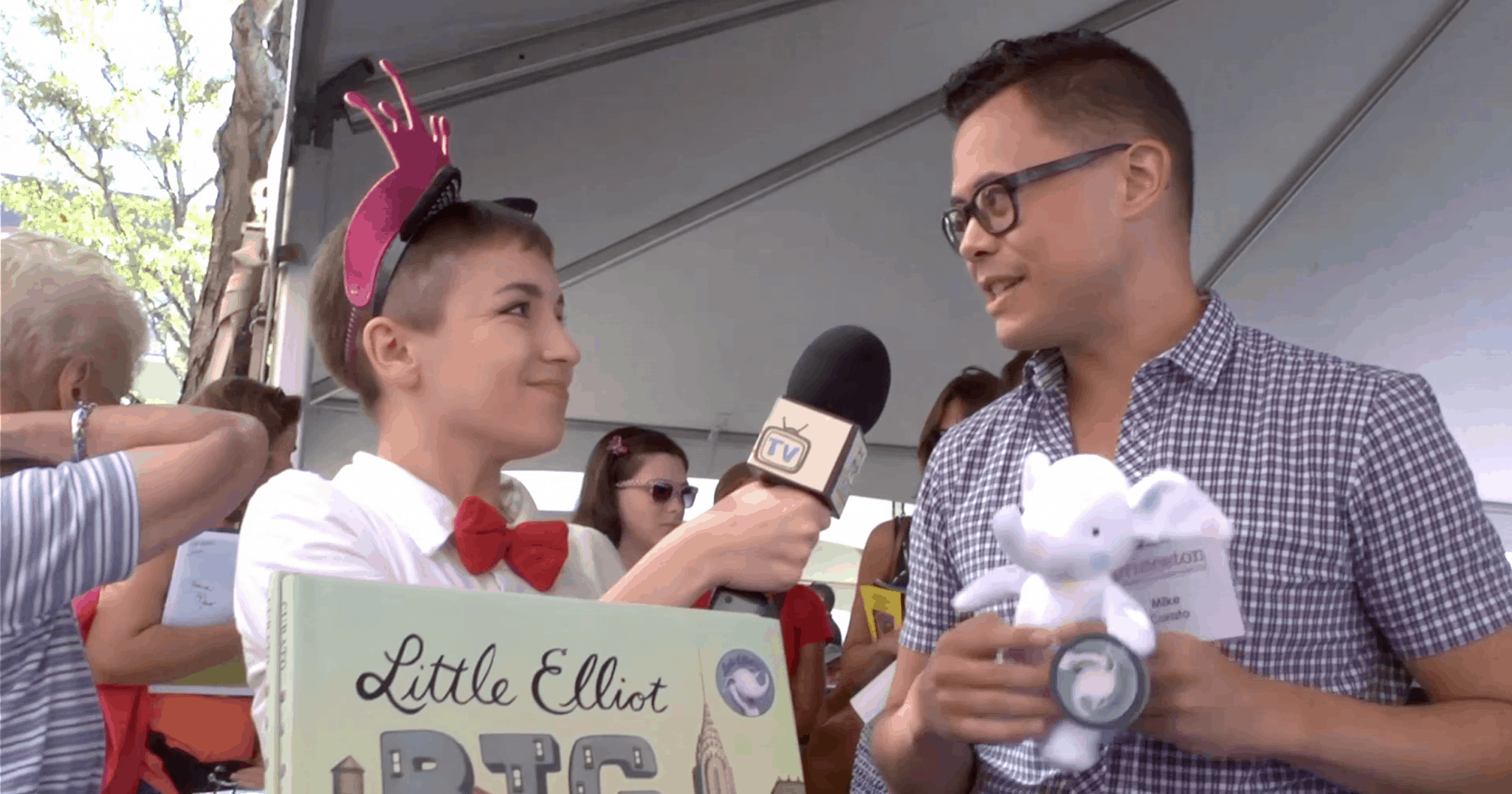 Little Elliot, Big City, is a story about a polka-dotted elephant that, like Mike, loves eating cupcakes. It has received starred reviews from Publishers Weekly and Booklist, made the Best Books of 2014 list on Amazon and Huffington Post, and won the 2014 Society of Illustrators Original Art Show Founder’s Award. It is the first of a three book series set in late 1930s New York City starring Little Elliot and his friend Mouse. The next in the series, Little Elliot, Big Family, comes out on October 6th. Mike and Little Eliot even showed off their dancing moves during the interview. In fact, Mike is our next guest on KidLit TV’s StoryMakers and he’ll be doing a LIVE gameshow at 4pm on Monday, Sept 28th! Follow us on Twitter (@NYMediaWorks) to play along!

Did you know, Adam Lehrhaupt’s true secret identity is in fact, Buzz Lightyear from Toy Story? Before the Princeton Children’s Book Festival KidLit TV started “KidLit Memes” which star our favorite authors as an internet meme. The first one we dreamed up was Adam as Buzz Lightyear. During the festival he even posed as Buzz while Katya called, “Adam Lightyear to Star Command!” 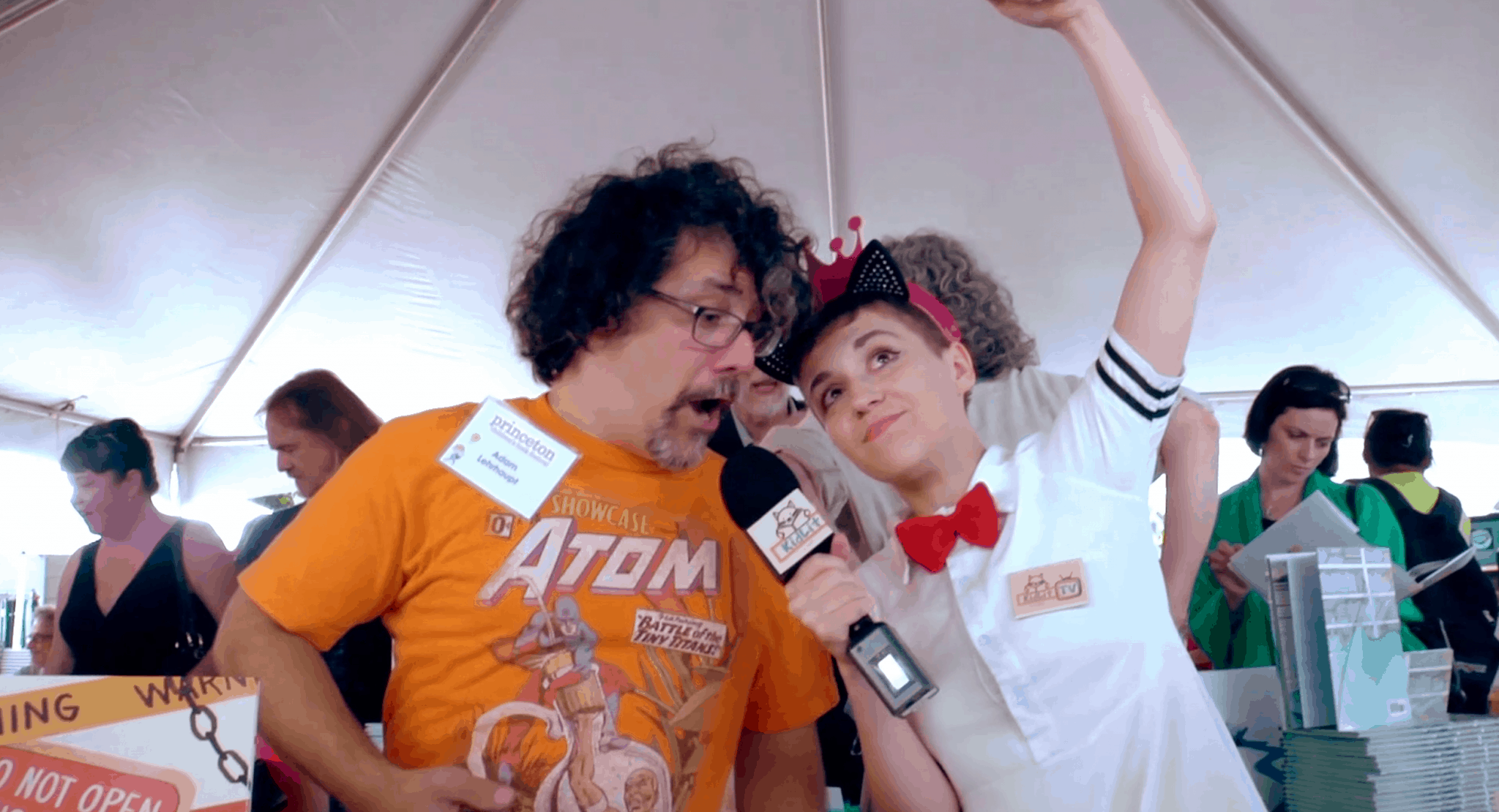 During his interview, we discover his secret identity and learn about his amazing books and why he chose to chop off his rock-star hair.

Deborah didn’t know she had won the Parents’ Choice Gold Award for her book By Mouse & Frog, so we were glad to give her the heads up about how she was, in fact, a winner. As Deborah said, she was an architect “once-upon-a-time ago”, but now she is an author and illustrator who instead of designing and constructing buildings, she builds children’s picture books, including Blue Chicken, The Story of Fish & Snail, and most recently, By Mouse & Frog. 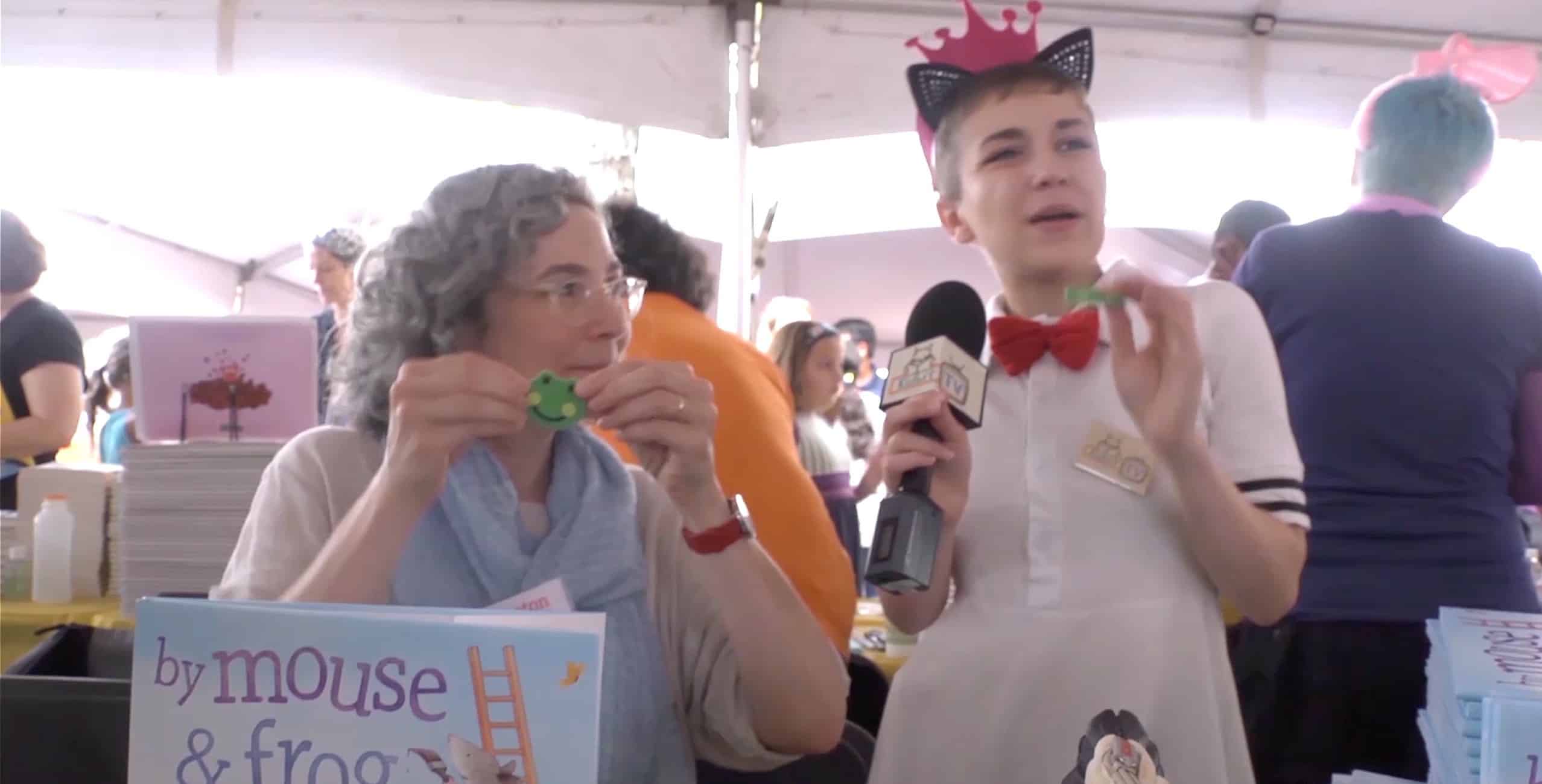 To celebrate our Parents’ Choice Gold Award, KidLit TV put together a list of our favorite Gold winners and chose By Mouse & Frog as one of our favorite picture books to have won the award!

Robin Newman and Katya first met at the 2015 NJSCBWI conference in June, but at the Princeton Book Festival they met again in the bathroom! There, Robin gave Katya a goodie bag—a mug decorated with her trusty detectives Wilcox and Griswold, a bag of candy, promos of her latest work, and, Katya’s favorite, a witch broom pen. How did she know Katya writes about witches? 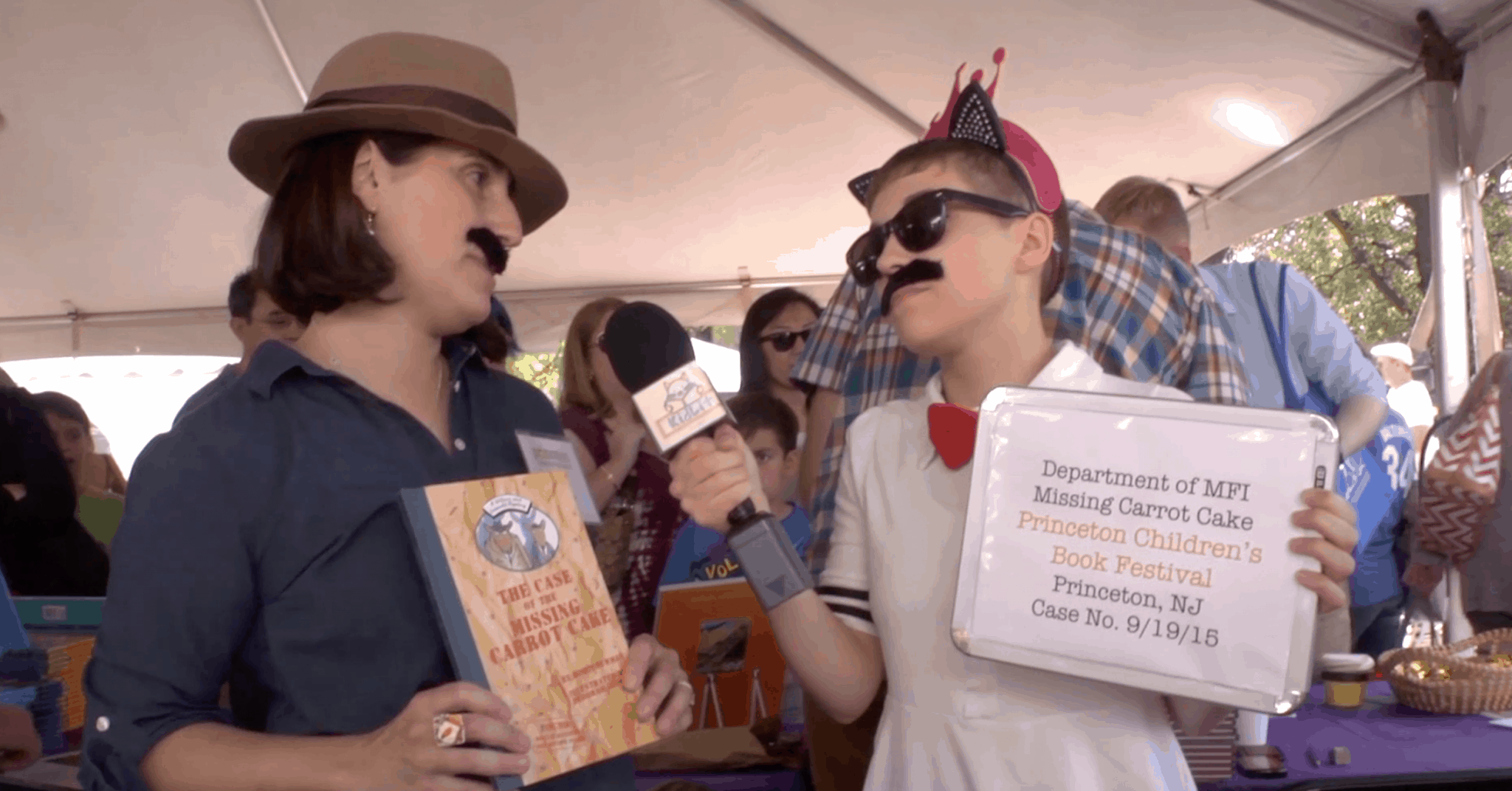 Raised in New York and Paris, Robin has been a practicing attorney and legal editor, but prefers to write all things kid lit. She is the author of The Case of the Missing Carrot Cake: A Wilcox & Griswold Mystery, illustrated by Deborah Zemke, Hildie Bitterpickles Needs Her Sleep, illustrated by Chris Ewald (coming in Spring 2016), and The Case of the Poached Egg: A Wilcox & Griswold Mystery, illustrated by Deborah Zemke (coming in Spring 2017). During her interview she gave us some detective advice and spotted Katya as the most suspicious suspect at the festival.

Brian Biggs has worked with many of the greatest voices in the kid lit world such as Jon Scieszka, Garth Nix, Wendelin Van Draanen, Mac Barnett, Marilyn Singer, and Kelly DiPucchio. Brian is the illustrator of as he says, “over one bazillion children’s books.” He truly has his very own emporium of children’s literature. 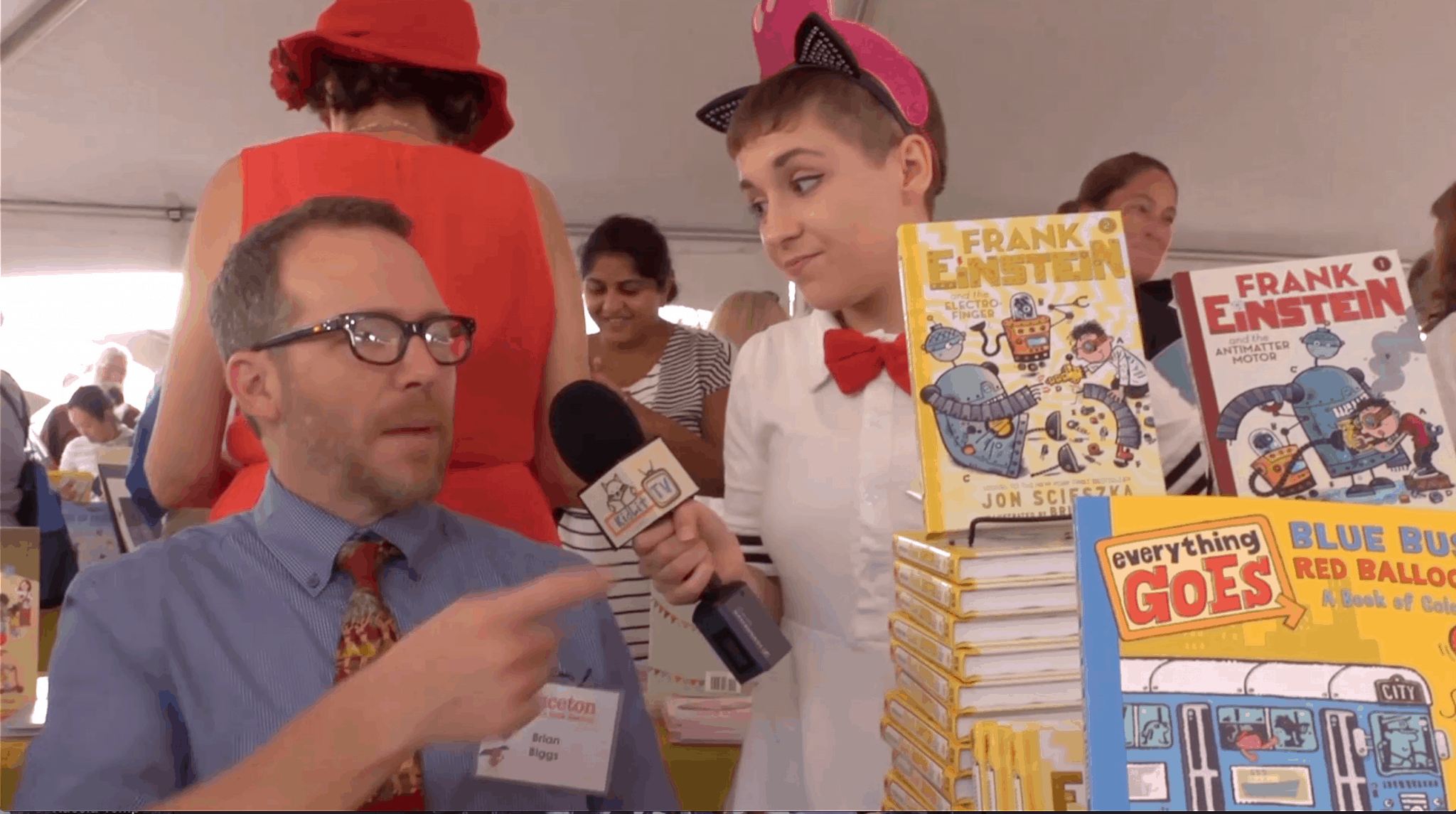 These ladies know how to sing, but they also have a great insight about how their friendship developed by working on the writing and illustrations for their book Where Do Fairies Go When it Snows? 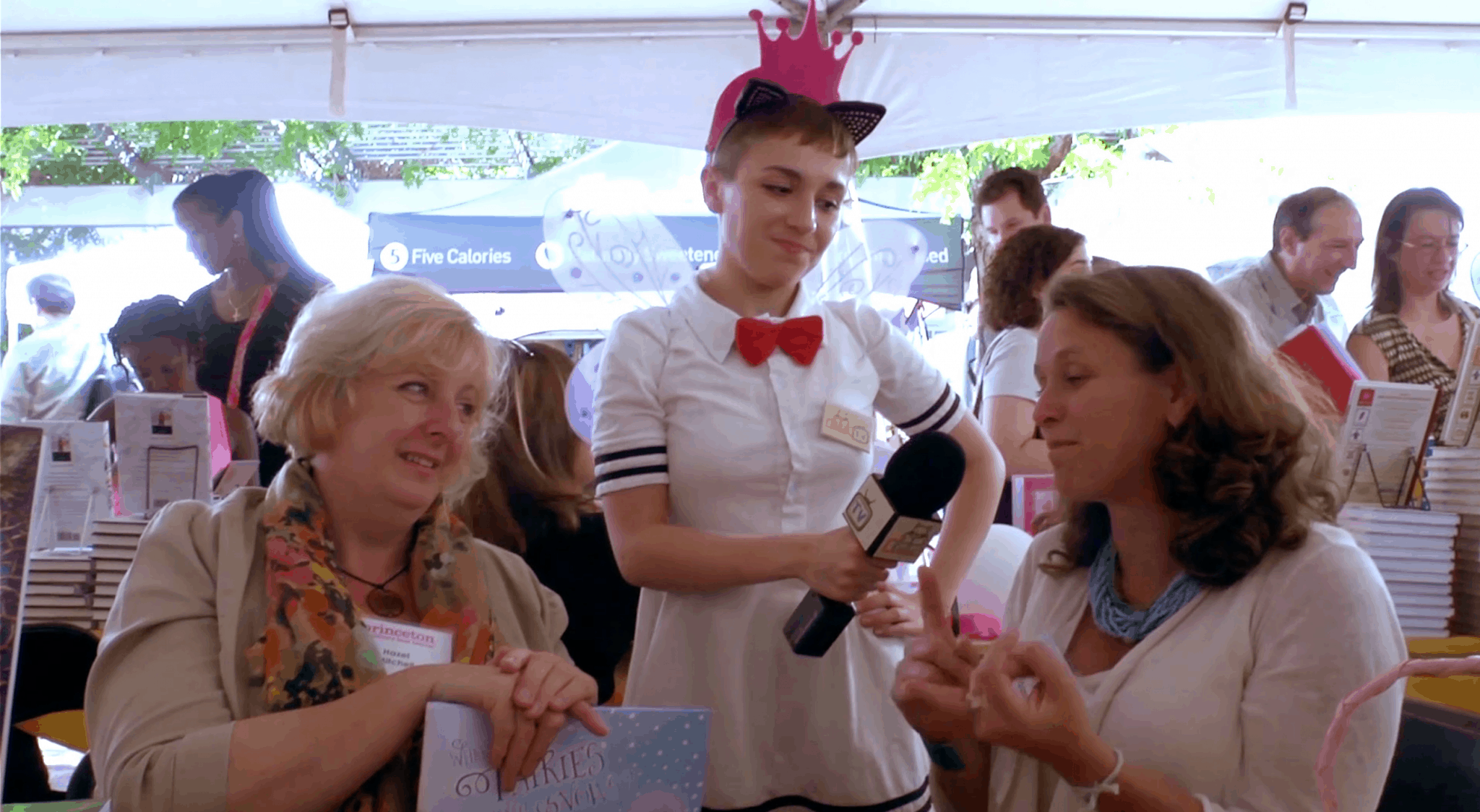 Ame Dyckman is the award-winning author of Boy + Bot, Tea Party Rules, and Wolfie the Bunny. She has wanted to write for kids ever since she was one and shines like a true kid lit star wherever she goes. 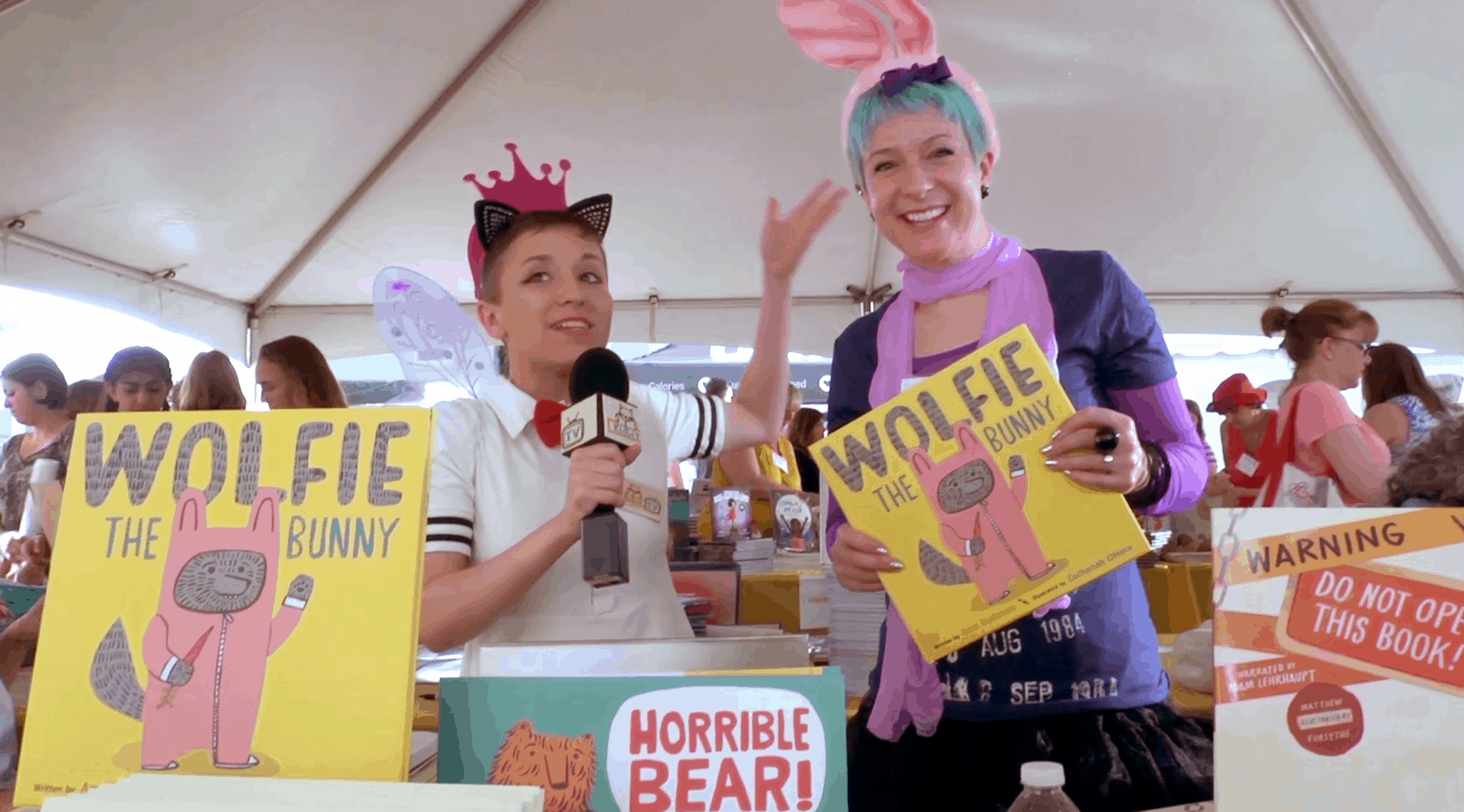 The KidLit TV team was so impressed by the singing talents of the many authors and illustrators!

Ame is also a KidLit TV StoryMaker! Be sure to watch her episode of StoryMakers with Zachariah OHora as they talk all about their best-selling picture book Wolfie the Bunny!

“You and Ame could be sisters. Are you?” — Zach to Katya before the interview

Zachariah OHora is well known in the kid lit world, and it has nothing to do with wearing Wolfie jammies. Well, maybe a little. He is the author and illustrator of The Huffington Post’s Best Book of 2013, My Cousin Momo!, No Fits Nilson!, and the PA One Book for 2012, Stop Snoring Bernard! He is also the illustrator of The New York Times bestselling book Wolfie the Bunny written by Ame Dyckman. 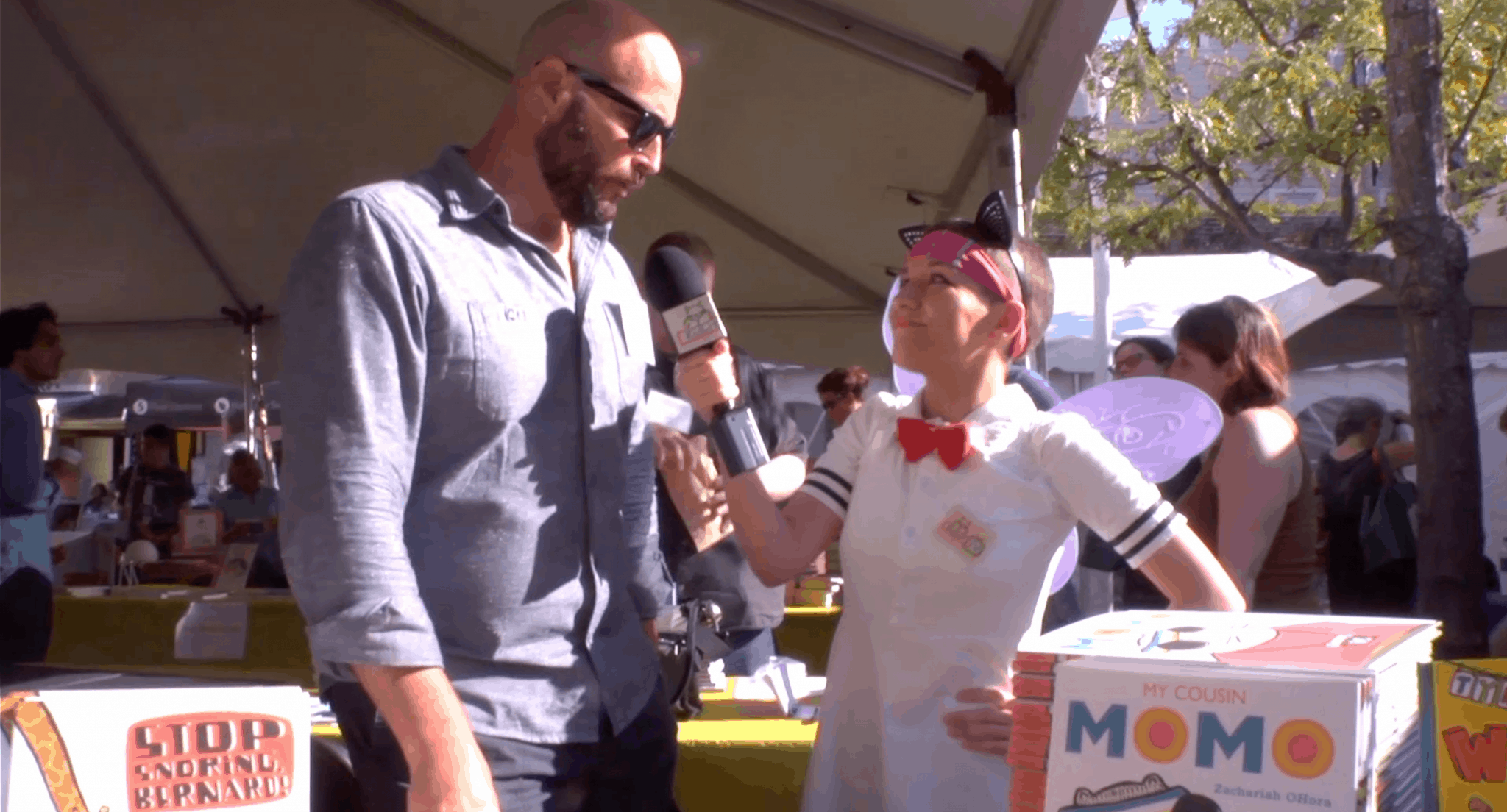 Be sure to also watch his episode of StoryMakers with Ame Dyckman!

KidLit TV has always been one of Rita Williams-Garcia‘s biggest fans, but now she has many others as well after singing about Gone Crazy in Alabama at the festival. Crowds of people swarmed around her, cheering and laughing during that one, crazy interview. 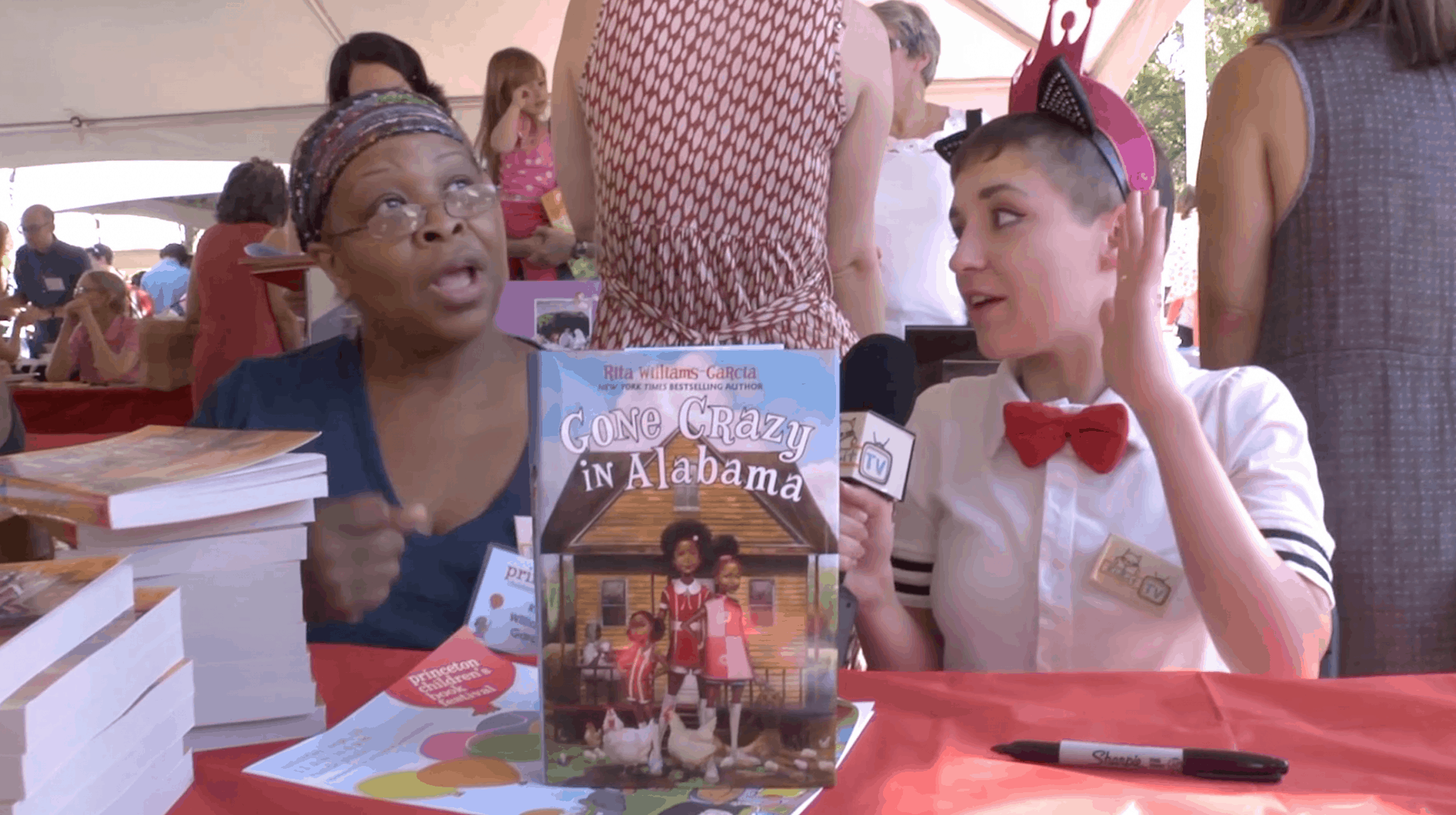 Her Newbery Honor novel and New York Times bestseller, One Crazy Summer, won the Coretta Scott King Award, was a National Book Award finalist, and the recipient of the Scott O’Dell Award for Historical Fiction. The sequel, P.S. Be Eleven, was also a Coretta Scott King Award winner and an ALA Notable Children’s Book for Middle Readers. The third book about the Gaither sisters, Gone Crazy in Alabama, was published this spring and shows Rita’s true love for these girls.

“After spending so much time with them, they became family to me.”

She is also the author of six young adult novels:

Be sure to watch her StoryMakers episode to discover more of Rita’s hidden talents. 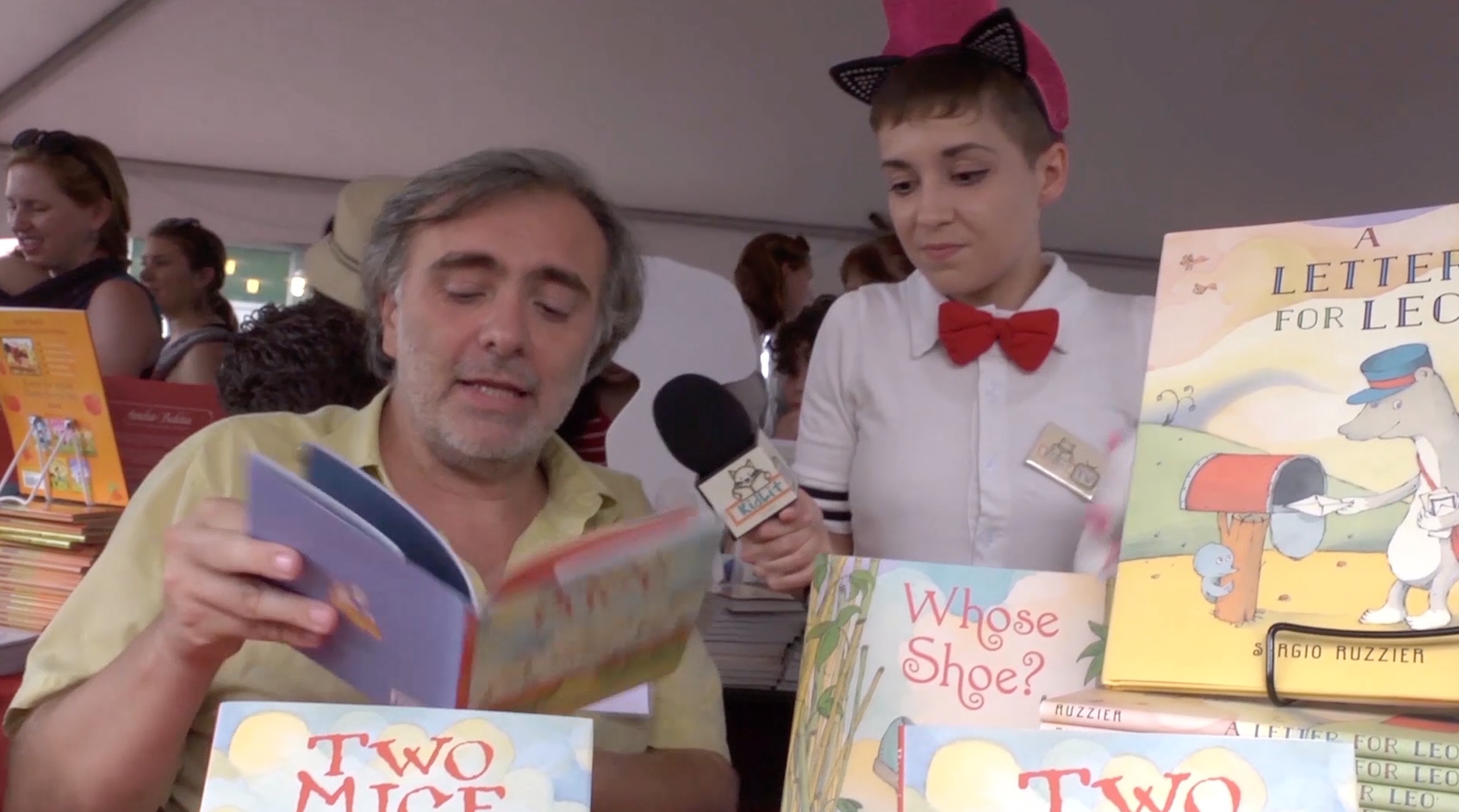 Sergio Ruzzier truly is a KidLit TV StoryMakers alumni! During the Princeton Children’s Book Festival we interviewed him about his book, Two Mice which is about two mice who have an exciting and eventful day. Young readers will be able to count from one to three and back again, while going on a daring adventure with these lovable characters. Be sure to watch Sergio’s StoryMakers episode!

Roxie Munro sure knows her way around the market. In her new book, Market Maze, kids learn about the market, where food comes from and how it gets to their tables.

In eleven complicated drawn mazes that even adults will have fun trying to solve, eight vehicles, each carrying a different product, are on their way to the city. Information on all of the products and how they are shipped on their journeys are included, along with answers to all of the mazes. For additional fun, kids are challenged to go on a scavenger hunt and look for objects hidden on each spread. 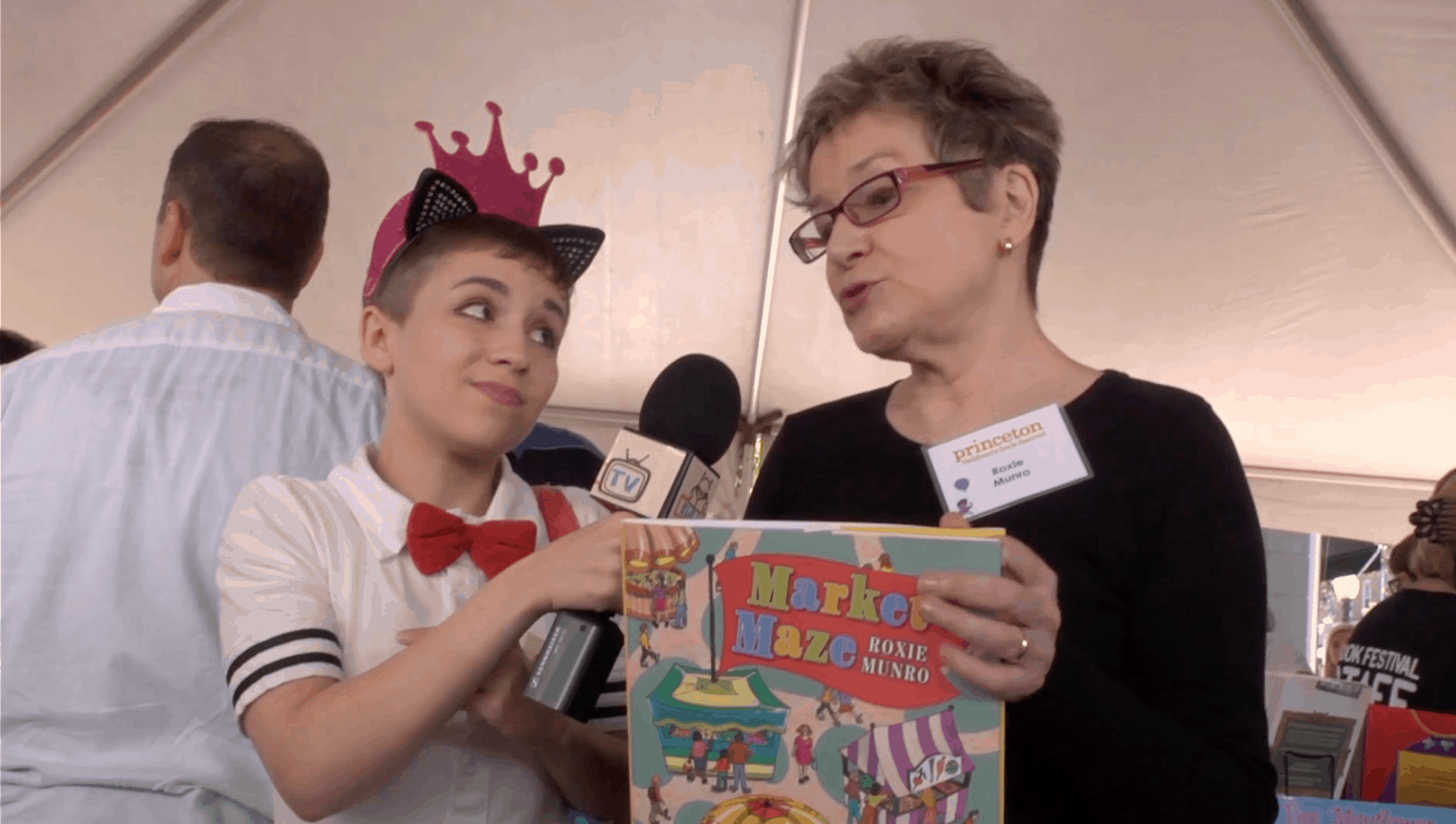 Roxie is the author/illustrator of more than 40 books for children, including Mazescapes, Amazement Park, the Inside-Outside Books (The New York Times Best Illustrated Award), Mazeways: A to Z, and Go!Go!Go!. Her books have been translated into French, Italian, Dutch, Chinese, and Japanese.

Her recent books include:

Roxie is also the creator of many children’s interactive apps such as:

To learn more about Roxie and her amazing creations, be sure to watch her episode of StoryMakers!

KidLit TV had an amazing adventure during the 10th Anniversary of the Princeton Children’s Book Festival. Julie and Rocco were busy with interviews and making sure everything was perfect for the guests at the library, while Kassia showed off her artistic abilities as a makeup artist and took care of the busy Camp KidLit TV tent that was chock-full of guests. This Field Trip! proved that team work can make anything possible. And where better to prove that than a place where kid lit creators, supporters and friends are reunited.