Have you ever wondered what life is like in the aftermath of a natural disaster? Is it possible for an individual or community to find joy in the process of rebuilding? Marvelous Cornelius: Hurricane Katrina and the Spirit of New Orleans isn’t typical of the books John Parra has illustrated in the past. The picture book, written by Phil Bildner, is a recount of life post-Hurricane Katrina. Real-life New Orleans, Louisiana sanitation worker Cornelius Washington serves as the jubilant focal point of the story. Parra captures Cornelius’ callouts and tricks through his vivid and bold painting style. The infectious spirit and waterproof soul of Cornelius Washington, as interpreted by Phil’s prose and John’s illustrations, solidifies Marvelous Cornelius: Hurricane Katrina and the Spirit of New Orleans as a strong modern-day folktale.


John Parra has illustrated multiple books for early and bilingual readers. He is a two-time recipient of the Pura Belpre Honor which recognizes a Latino/Latina writers and illustrators whose work affirms and celebrates the Latino cultural experience in children’s literature.

John’s love of art was influenced by his amateur artist father. His father is also an avid baseball fan, which came in handy when John created illustrations for Round Is a Tortilla. When he’s not illustrating kid lit, he shows work internationally.

Watch to find out why Rocco’s favorite book illustrated by John is Round Is a Tortilla, what publishers John will illustrate for next, and to get familiar with diverse books that will enhance the lives of young readers whether they are your children or students.

We’re giving away three (3) John Parra book bundles. Each bundle contains a signed copy of Marvelous Cornelius: Hurricane Katrina and the Spirit of New Orleans, Green is a Chile Pepper: A Book of Colors, and Round is a Tortilla: A Book of Shapes. Enter now!

Via John Parra Art
Marvelous Cornelius: Hurricane Katrina and the Spirit of New Orleans (Written by Phil Bildner) – In New Orleans, there lived a man who saw the streets as his calling, and he swept them clean. He danced up one avenue and down another and everyone danced along. The old ladies whistled and whirled. The old men hooted and hollered. The barbers, bead twirlers, and beignet bakers bounded behind that one-man parade. But then came the rising Mississippi—and a storm greater than anyone had seen before. In this heartwarming book about a real garbage man, Phil Bildner and John Parra tell the inspiring story of a humble man and the heroic difference he made in the aftermath of Hurricane Katrina.
Green is a Chile Pepper: A Book of Colors (Written by Roseanne Thong) – Green is a chile pepper, spicy and hot. Green is cilantro inside our pot. In this lively picture book, children discover a world of colors all around them. Many of the featured objects are Latino in origin, but all are universal in appeal. With rich, boisterous illustrations, a fun-to-read rhyming text, and an informative glossary, this playful concept book will reinforce the colors found in every child’s day!

Round is a Tortilla: A Book of Shapes (Written by Roseanne Thong) – Children discover a world of shapes all around them: Many of the featured objects are Latino in origin, and all are universal in appeal. With rich, boisterous illustrations, a fun-to-read rhyming text, this playful concept book will reinforce the shapes found in every child’s day!

Waiting for the Biblioburro (Written by Monica Brown) – Ana loves stories. Once morning, Ana wakes up to a traveling library of books resting on the backs of two small burros, with enough stories to encourage her to create one of her own. Inspired by the heroic efforts of real-life librarian Luis Soriano, and his mobile library who journeys to bring literacy and culture to the children of rural Colombia. Teacher’s Guide

Gracias/Thanks (Written by Pat Mora) – There are so many things to be thankful for. For one young boy, it’s flying ladybugs, splashing ocean waves, a best friend, and much more. Straight from the heart of a child flows this lighthearted bilingual celebration of family, friendship, and fun. Come share the joy, and think about all the things for which you can say, “¡Gracias! Thanks!”

My Name is Gabriela (Written by Monica Brown) – Gabriela Mistral loved words and sounds and stories. Born in Chile, she would grow to become the first Nobel Prize-winning Latina woman in the world. As a poet and a teacher, she inspired children across many countries to let their voices be heard. This beautifully crafted story, where words literally come to life, is told with the rhythm and melody of a poem. My Name is Gabriela is beautiful tribute to a woman who taught us the power of words and the importance of following our dreams. The story of Gabriela Mistral will continue to inspire children everywhere. Teacher’s Guide 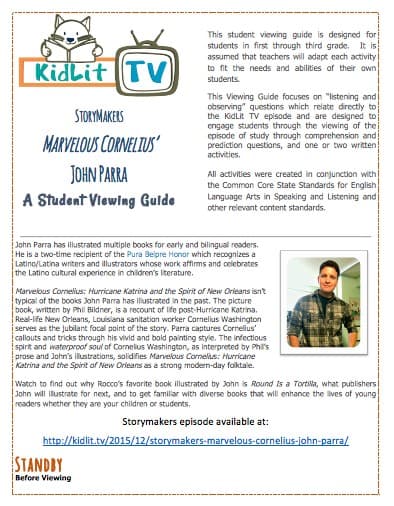 Via John Parra Art (abridged)
John Parra is an award-winning illustrator, fine artist, designer, and educator, best known for his art illustrated Latino-themed children’s books such as Gracias / Thanks and Waiting for the Biblioburro. For his books he has received many awards and honors including: The Golden Kite Award from The Society of Children’s Book Writers and Illustrators, The Pura Belpré Honor’s Award from The American Library Assoc., The Américas Book Award: Commended Title from CLASP, The International Latino Book Award: Best Interior Children’s Book Art from Latino Literary Now, and The Christopher’s Award from The Christopher’s Inc.

Parra’s original artwork has also been showcased and displayed in numerous gallery shows and museum exhibitions in New York, California, and throughout the United States and abroad. Many of his fine art paintings now reside with private collectors. He has taught art at the Carnegie Art Museum in Oxnard, CA and regularly speaks at primary schools, college universities and literary conferences across the country advocating art and reading education.

John’s artistic path began while growing up in Santa Barbara, CA. He spent his days exploring and drawing landscapes, wildlife, city, and family. His Hispanic roots and heritage provided a rich cultural palette of inspiring imagery and customs. Mexican mural artists, folk-style paintings, pop art, surrealism, outsider art, regional cuisine, music and dance costumes are all visual influences seen in his work. As his artist journey progressed, John went on to graduate from the prestigious Art Center College of Design in Pasadena, CA.

Now living in Queens, NY, with his wife Maria, John continues working in his studio, passionately creating art through his imagination and creativity. He received the Pura Belpré Honor award for his book, Green on is a Chile Pepper, and the Hurricane Katrina-inspired, Marvelous Cornelius: Hurricane Katrina and the Spirit of New Orleans. 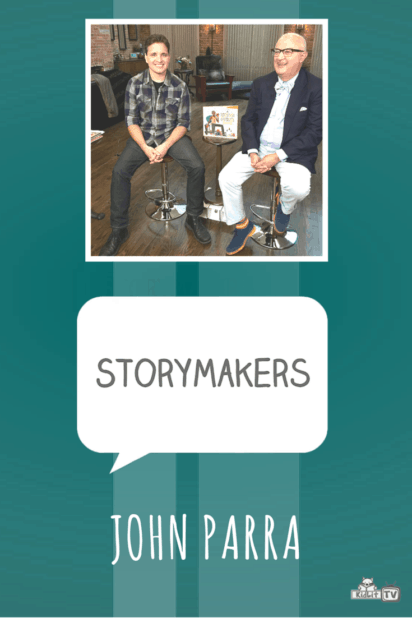 Thanks for bringing John Parra to my attention. He is quite talented!

He’s one of our favorite artists! Thank you for watching, Donna.