I don’t know how to put this, but Rob Biddulph is kind of a big deal in the picture book world. His books, Blown Away, Odd Dog Out and Sunk!, are undisputed members of the Kid Lit canon.He published four more books this month and has another coming out in a few days. Even Tom Hardy wants in on the action (Yes. That Tom Hardy. See what I mean here.). So, when we had the chance to talk to Rob about some of the books that inspired his career, we jumped at the opportunity. 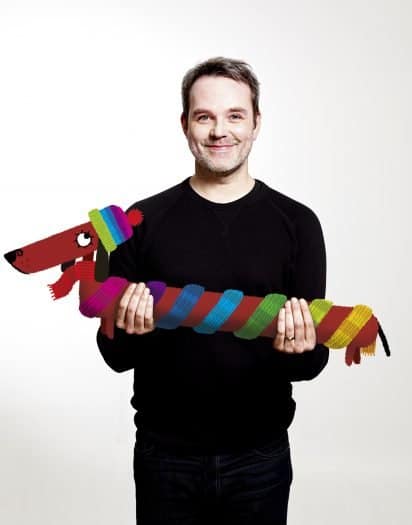 TiaT: Was there a particular picture book that had a strong impact on you as a child?

RB: I have a very strong memory of reading Dogger by Shirley Hughes in Mrs Harris’ classroom when I was about five. I still love that story. I was also a big fan of the Meg and Mog books by Helen Nicoll and Jan Pienkowski. But my absolute favourite was Richard Scarry. Particularly What Do People Do All Day? 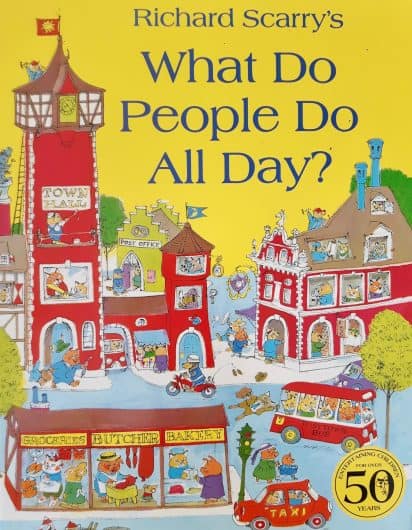 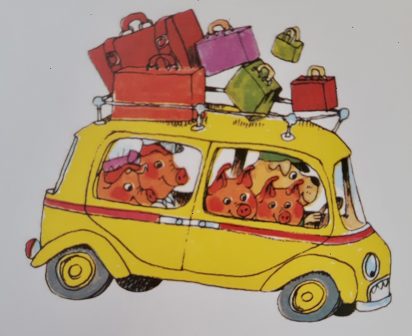 TiaT: What was it about Richard Scarry’s work that captured you?

RB: Well, I really liked all of the recurring characters in the book – Huckle Cat, Dingo Dog, Lowly Worm etc – but it was the detail in the illustrations that really fascinated me. I loved being shown the process of what went into the building of a house, how coal was mined or how roads were constructed.

TiaT: Are there particular images or lines you can remember that really wowed you?

RB: I remember there was a spread featuring a cross-section of a ship that I would pore over for hours. It showed all aspects of seafaring life: how the steering wheel connected to the rudder via a series of levers and pulleys, the rooms where the crew slept, the luggage hold, the restaurant. It was absolutely teeming with life and detail. No matter how many times I looked at it I would always spot something that I hadn’t before. 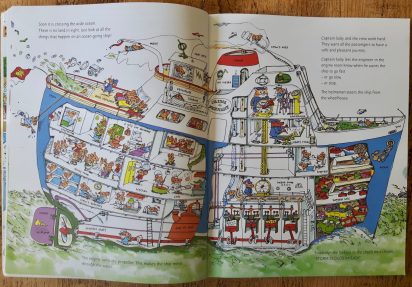 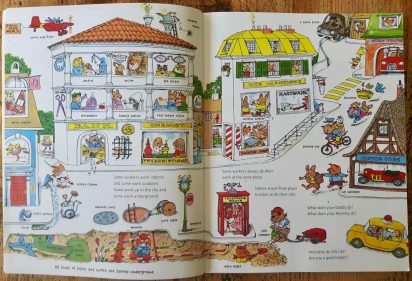 TiaT: Can you remember who introduced you to Scarry’s books?

RB: I think my mum bought me Storybook Dictionary when I was very small and we would read it together every night. That started the habit. I would ask for a Richard Scarry book every Christmas from then on. I was hooked. I have since read them with my children and they love them too.

TiaT: Do you think then that Richard Scarry’s books played a role in influencing your work?

RB: It was certainly one of the things that inspired me to start drawing. I used to spend hours copying his illustrations onto huge sheets of paper (old architectural plans that a friend of my dad’s would bring home from work and give to me). I think my mum still has some of the drawings. (We would love to see those Mrs. Biddulph!)

TiaT: Do you think those hours spent pouring over What Do People Do All Day?in childhood ultimately impacted your personal style?

RB: Well, the opening spread in Odd Dog Out owes a lot to What Do People Do All Day?. I did my best to include the same level of detail. The first thing my mum said when she saw the book was “Ooh, it’s very Richard Scarry”. I took that as a huge compliment. 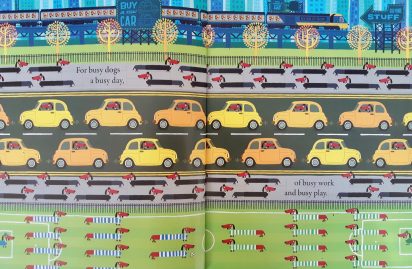 TiaT: Is there a picture book you have seen recently that knocked your socks off that you would recommend to young readers?

RB: There are so many great new picture books out there. Jon Klassen and Oliver Jeffers are consistently brilliant. I also like the Oi! series by Kes Gray and Jim Field. A little gem I recently discovered was Last Stop On Market Street by Matt De La Pena and Christian Robinson. A simple, beautiful story of a boy and his nana who go on a bus journey through town. It has genuine emotional punch.

TiaT: Thanks for taking the time, Rob!

Rob Biddulph is the author/illustrator of Blown Away, Grrrrr!, Odd Dog Out, and Sunk. He just re-illustrated the classic Flat Stanley series for Egmont (three of the books in that series came out last week!). Rob’s fifth author/illustrated book for HarperCollins publishes in a few days. It’s called Kevin and, excitingly, Rob told us that it might be his favourite of the books he’s written so far. Rob is currently writing a brand new series for little ones — the first of which will come out in April next year.

Two in a Tepee with Yuval Zommer