This month in Creativity Corner, Terry Shay is bringing you a list of the fun hidden surprises in your favorite kid lit titles. Let’s go for an Easter Egg Hunt in October! 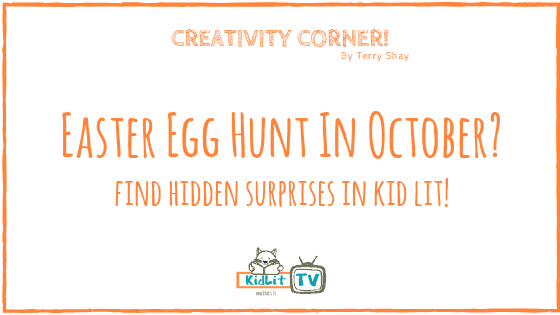 The Urban Dictionary describes an Easter Egg as, “A hidden item placed in a movie, television show, or otherwise visual media for close watchers.“

Many years ago, my friend Bill Norris showed me how names, like his, were hidden in the Peter H. Reynolds book, SO FEW OF ME. Since then I’ve looked for Easter eggs (hidden pictures or names) in books.

While reading Stacy McAnulty’s next book,THE WORLD ENDS IN APRIL, I noticed a character named Ms. Richmond. I know that Stacy and Lori Richmond are friends, so I tweeted them both.

Super agent, Lori Kilkelly of LK Literacy Agency suggested I add a segment on my Creativity Corner post. I thought that was an awesome idea. Below are some Easter eggs shared by authors and illustrators.

I’ve put references to projects I want to do in books I’m actually doing—so if the next project doesn’t get published, at least a *little* of it did!

Two books I illustrated in 2003 and 2005 (Irene Livingston’s FINKLEHOPPER FROG and FINKLEHOPPER CHEERS) both included some critters I was thinking about, and finally published in 2006.

Beginning in 2006 with BATS AT THE BEACH, there has been a bat with floaties in the Bat books. In BATS AT THE BEACH, Little Bat appeared as a sort of ‘innocent,’ experiencing things for the first time and feeling left out by all of the older bats. He was in BATS IN THE LIBRARY in 2008, where he appears with his grandfather who is in wire-rimmed glasses. In THE BATS IN THE BALLGAME his grandfather took him to the game. He also appeared in BATS IN THE BAND.

Good news for Bat and floatie fans, Little Bat will soon appear in his own book which will be called NIGHT SCHOOL or LITTLE BAT IN NIGHT SCHOOL. Although he is too little to fly on his own in all the previous bat books, frequently holding on to his mother’s belly fur, we will have to see how he gets around in the new book.

In my latest novel, SHOUTING AT THE RAIN, there is a beloved character named Saucepan Lynn who runs a diner and talks about the time necessary to make a fine sauce. The name Saucepan Lynn is an anagram of my editor, Nancy Paulsen.

Also, Ronan Gale’s mom is named Andrea Gale after the fishing vessel, Andrea Gail, that got caught in a legendary storm off the coast of Massachusetts and sunk in 1991.

In my novel, FISH IN A TREE, there is a poster in the principal’s office that reads, “It takes courage to ask for help. ~C. Connors” This quote is credited to Carley Connors, my main character of my first novel, ONE FOR THE MURPHYS.